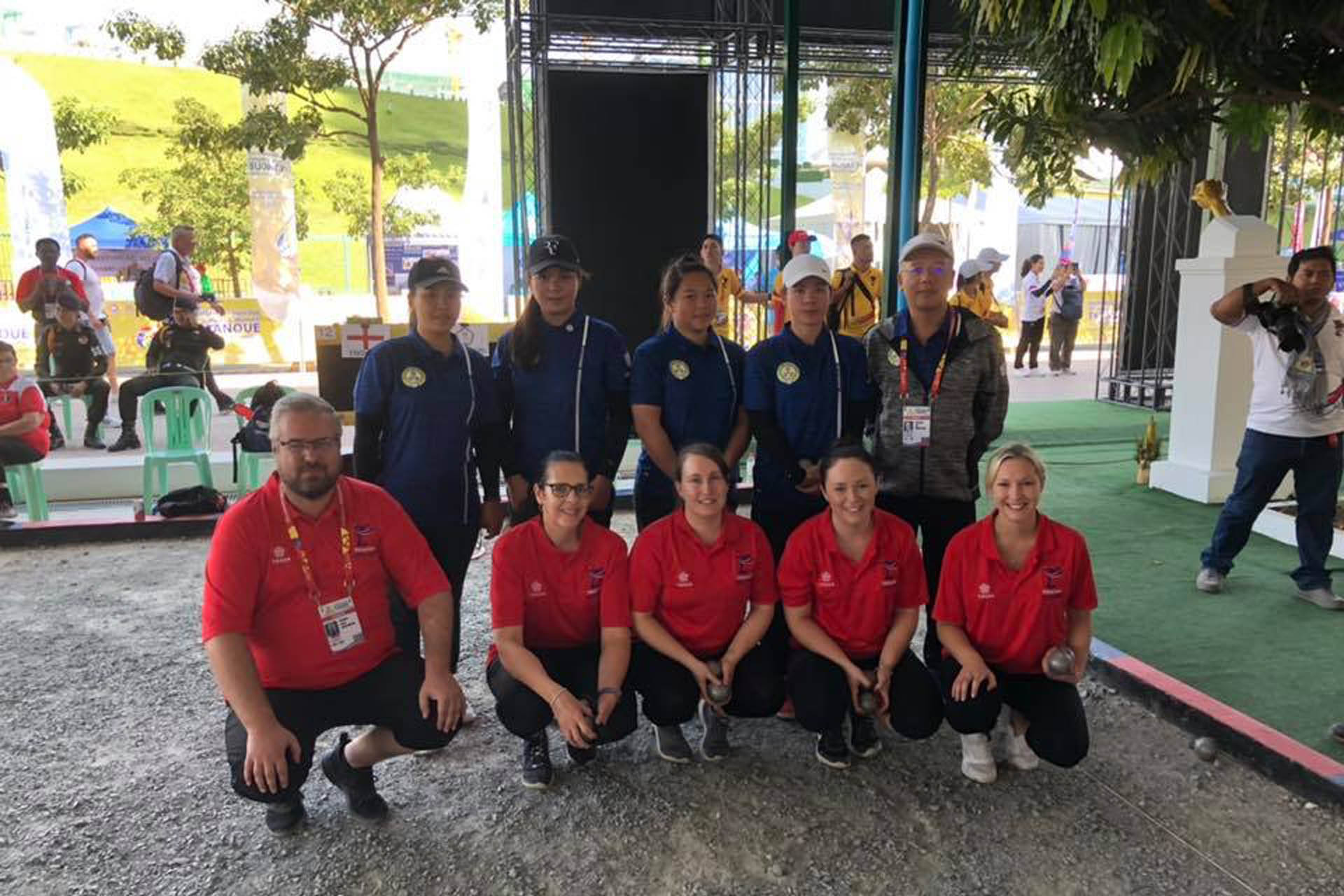 After day one of the Triples in the respective Youth and Women’s World Championships, both our teams knew that they had to win both their two final matches in the five-round Swiss System qualification to secure a spot in the main competitions.

For our young players, the 4th match was against Turkey, where they started strongly to take a 6-0 lead and then maintained a good position to find themselves at 9-5 up. Unfortunately, they were unable to maintain the advantage and ended up being defeated 9-13.

As a result of that defeat, England was then given a bye in the final round and had to await the draw for the Nations Cup (NC). Ranked 22nd out of 27 teams, England then faced the bottom ranked team from the USA in a ‘cadrage’ to find the Quarter Finalists of the NC.

Our team simply could not get going in this match and found themselves in a very difficult position at 0-12. It was then that a spirited fightback followed, with nine points being scored in three ends. Regrettably, the American team was then able to turn things around and ran out the victors 13-9.

Despite the single win at the tournament, our young players David Blyton, Jamie Brooks, Liam Floyd and Kai Sheffield played with great team spirit for our country and it will be a valuable learning experience. As first-time competitor at elite level Liam said on social media after the tournament had finished, “We’ll come back stronger”. Well-said, Liam!

In several of their matches our youngsters led but were ultimately unable to close down the wins. That is certainly an important learning point for our team – how to finish off the opposition.

The 4th match in the Swiss qualification for our Women’s team of Sarah Huntley, Emma Longstaff, Sammy Thatcher and Claire White was against Chinese Taipei but try as they could, our team could not get a foothold in this match and ended up losing 4-13. Knowing that defeat had effectively put them out of the main Championship, the final match was against Brunei, where our team had a much more controlled performance to win 13-5.

The final ranking after the five rounds placed England 40th out of 48, although, just one more win would have catapulted the team into 24th place and a cadrage match in the Championship to try and win through to the Top 16. Looking back at the competition, it was the defeat to Australia 10-11 in the third timed match which more than anything else ended up being the main blow to our team’s chances.

As with the Youth, our women then faced a cadrage round against Denmark to proceed to the top 16 of the Nations Cup. The Danish team, always formidable competitors were too strong for England and we ended up with a 5-13 defeat.

The Women’s tournament in many respects had a number of surprises in that European teams like England which historically have ended up in the Top 16 or better like Denmark and Germany did not qualify to the final stages on this occasion. In the Top 8 of the rankings after five rounds there was only one European team in the shape of Sweden. Five out of the top eight were from south east Asia.

It will be fascinating to see who ends up with the medals but Thailand, Cambodia (with both teams still competing) and Vietnam look strongly placed. We will find out over the next couple of days.

Whilst our Women’s team will be very disappointed with this tournament, we know that our players have proved for several years now that they are highly competitive internationally. It was only a few short months ago that Sammy and Emma were one match away from a medal in the Women’s World Doubles Championship in Spain.

As with all elite sport, it is very tough at the top and we have to constantly review our approach. We cannot rely on past success for future success. We celebrate the good times and learn from the not so good times. PE will take some time now to review our 2019 international interventions and we will hold a specific meeting where we will look at what we have learnt from another very busy and active year for our country. We now look forward to 2020.

Pétanque at this level is constantly evolving and countries that may not have featured previously are constantly emerging. The fact that our sport has expanded in South East Asia as well as Cambodia being the hosts this time around is fantastic for the global reach and profile of pétanque. From all of us in England to all of our friends in the Cambodian Federation, thank you for such a brilliant tournament and your hospitality.

Our teams cannot function without organisational and coaching support. We are very grateful to our Head of Delegation, Annette Eggelton, our Youth Coach Scott Ashby and our Women’s Coach, Rowland Jones. We know that you have been giving your utmost to our players and we thank you for it. Thanks too, to our small group of supporters that travelled halfway across the globe at their own expense to back our teams.