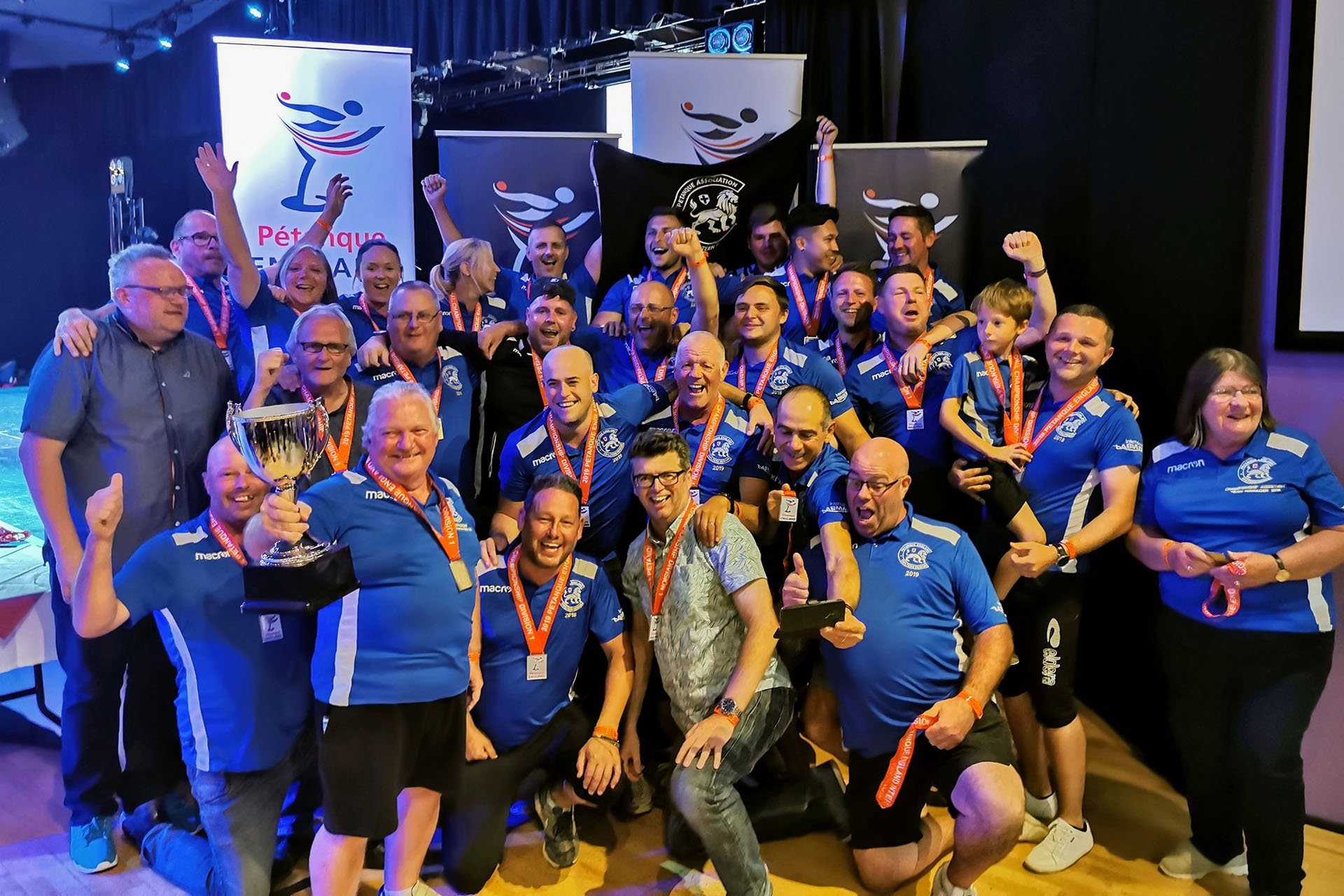 The sun certainly smiled on everyone competing in this year’s Inter-Regional Championships and Challenge competitions as we enjoyed fantastic playing conditions down on the south coast at the Mill Rythe Holiday Village.

At the conclusion of play on Sunday, it was Chiltern Region that had the most to celebrate, lifting both the Division One Championship, Division One Challenge and the inaugural President’s Cup which aggregates results in all the competitions.

Saturday saw a round robin of seven matches, and at the end of the day, Southern had a 100%-win record with Kent second on six wins and Chiltern third on five wins.

Five matches were played on Sunday and Southern started strongly winning their first three encounters against Eastern, NYS Select and Great Western. The first key match came in the third round where Kent beat Chiltern 13-5. However, Chiltern bounced back in round 4 by winning 13-7 against Southern and with Kent winning their fourth round match 13-9 against Great Western, it set up a crunch match in the final round between Kent and Southern who were both on 10 wins.

In the Youth Precision Shooting kindly sponsored by Pen Y Coed Pétanque, the pre-qualified competitors battled it out in two semi-finals. In the first, Ella Slade and Kai Sheffield both scored 15 points, but Ella went through as she had the greater number of 5-point hits. In the second, Marc Franco beat Jamie Brooks 21-5.

Congratulations to the winners and all our young players competing at Hayling 2019, well played and we hope that you all enjoyed yourselves.

Chiltern faced a tough challenge in Division One of the Championship, as they sought to achieve a third consecutive win. They started well, winning 18 matches in the first three rounds on Saturday, but it was London who flew out of the blocks, winning 20 matches out of 24 in the opening encounters. Kent and Southern were right in the mix too, both chalking up 17 wins.

The fourth round saw a 8-0 victory for Chiltern over Northern, while London secured a 5-3 victory over East Midlands, Southern won 6-2 against Sussex and Kent dominated Thames Valley 7-1.

This set up the remaining three rounds of the day where the four highest placed teams would encounter each other in some key battles that would be critical in the overall contest.

The overnight position was confirmed after Round 7 when Chiltern had a crucial 6-2 win over London and Kent shaded their match 5-3 against Southern. This gave Chiltern 42 wins in total out of a possible maximum 56, a significant but not insurmountable five game lead over Southern on 37 wins while Kent were on 34 and London on 33.

Despite the gap, Sunday is always the day where the competition is won and lost. There is also some advantage in being placed 3rd and 4th at the end of day one, as it means a slightly more favourable draw in the five games that remain.

Both Kent and Chiltern began very strongly in the first round of the day with a maximum eight wins against Thames Valley and Sussex respectively. London beat Northern 7-1 and Southern had a tighter match against East Midlands but chalked up a 5-3 victory.

The second round saw Chiltern’s advance halted by East Midlands as honours were shared 4-4. Over the weekend, it was East Midlands that achieved the best results against Chiltern, showing somewhat of a revival of the proud traditions of the forty-year-old region. Meanwhile, London won 6-2 against Thames Valley, Kent 5-3 against Northern and Southern were held 4-4 by neighbouring region Sussex.

It was all set up for the final three showdown Sunday rounds with Chiltern on 54 wins, Kent on 47 and London and Southern on 46.

The biggest winners in round three were Southern with a strong 7-1 showing against Kent, while London and Chiltern had a tied match 4-4. Southern had a major setback in the next round with a 2-6 reverse against London, while it was a 4-4 stalemate between Kent and Chiltern.

With just the final round left, Chiltern’s tally of 62 wins gave them a six-win margin over London in second place. Chiltern’s points advantage also mean that if the two regions ended up on equal wins, this would be enough for Chiltern to lift the trophy. London enjoyed a four-win margin over Kent and just a single win advantage over Southern.

As it transpired, Chiltern signed off with a commanding 7-1 defeat of Southern to secure 69 wins and which in turn allowed London on 60 wins to claim the runners up spot with a 4-4 result against Kent. Kent secured third place on points difference over Southern – both ended on 56 wins – whilst East Midlands completed their weekend in fifth place on a creditable 51 wins.

Northern and Thames Valley were relegated to Division 2, whilst Sussex, promoted this year maintained their newly won status in the top division.

In the individual teams competition, the London 2 trio of Sofiane Lachani, Monty Quaia and Hamza Mouni that were ranked first with 11 wins, although this was on a small margin of three points difference over runners up Nigel Ashby, Alex Harrison, Tim Raine and Andrew Winter, a really excellent performance by the East Midlands 6 team.

In the lower division, PE’s Anglia Region won the title with a comfortable 9-win margin over runners up Isle of Wight. Anglia in fact matched Chiltern’s 69 wins on their way to lifting the trophy.

Anglia had a very strong Saturday with 42 wins, establishing a lead that they never relinquished and increased on the Sunday. The title was pretty much won prior to the final round contest between Anglia and Isle of Wight as the former had a 7-win advantage at that point.

Both teams return to Division One after being relegated in 2018. Welcome back to the top tier!

Top individual team here was Phil Boarder, Dan Cooper, Marion Halsey and Ian Ward (Anglia 6) on 11 wins out of 12. Well played, and special thanks to Phil and Marion as well for the sponsorship of the Youth precision shooting competition.

Chiltern completed the Division One double by finishing on top of the eight-region Challenge, but only by a narrow margin of two wins over runners up East Midlands.

Chiltern didn’t start well on day one with a 1-3 reverse against East Midlands but finished strongly with 4-0 and 3-1 wins respectively over Isle of Wight and Southern.

East Midlands matched Chiltern all the way and at the conclusion of Saturday both teams had 18 wins. Sussex were right in the mix as well, just one win behind on 17, their only real setback of the day being a 1-3 defeat at the hands of Southern.

Sunday proved to be an exciting battle for the title as East Midlands and Chiltern both won six games out of eight in the opening two rounds. However, the tide looked like it had turned in the next round in the Midlanders’ favour as they beat Sussex 3-1 and Chiltern let it slip 1-3 against Southern.

The penultimate round saw two 2-2 draws for both Chiltern and East Midlands against Sussex and Southern respectively, meaning that the final match between the two top placed regions would start with a two win advantage for East Midlands.

Chiltern had a far superior points difference, so East Midlands would have to win at least two matches to secure the title. Chiltern really raised their game though and won all four matches to 0, 2, 3 and 6 and ended up on 31 wins to East Midlands’ 29. Southern had rallied on Day 2 to win 13 matches out of 20, securing third place on 27 wins.

The top individual team was Adrian Emson, Myra Emson and Peter Taylor (Chiltern 1) on 9 wins and a superior points difference.

It proved to be a tight affair in the Challenge Division 2 with only a handful of games between the top five regions of Heart of England (champions), London (runners up), Eastern, Thames Valley and Devon.

What probably really swung it for Heart of England were the five 4-0 wins in the twelve matches, although London performed strongly, defeating Heart of England twice 3-1  in the competition and ending only 4 wins behind at the finish.

The weekend often throws up good news stories and it was the first-time attendees Dan Adams, Marc Rolf and Lee Smith (Heart of England 3) who ended up as top team on nine wins out of twelve. Welcome to Hayling and well played!

PE’s 16 regional champions plus last year’s defending champion Sarah Huntley competed in the qualification round, with the top four scoring players going through to the semi-finals on Saturday evening.

Sarah scored an excellent 39 points and was ranked first. Joe Sheffield of East Midlands (and our coach for the Men’s European Championships 2019) was placed second on 30 points, Federico Faucher of London was third on 27 points and Scott Ashby of Kent was the final qualifier on 24 points. Sammy Thatcher of Southern just missed out on 23 points.

In the first semi-final, Scott prevailed 35-22 against Sarah and Joe conceded in the final round (the jack) with Federico having an unassailable lead of 29-5.

A new award for 2019, the trophy was awarded to the region that amassed the largest number of wins across Youth, Championship and Challenge competitions.

Once the calculations had been made, Chiltern were the clear winners on 109 wins, 15 ahead of Southern in second place, 19 ahead of Kent in third place and 20 ahead of Anglia in 4th place.

To be competitive in this, there’s no doubt that regions need to have a youth team. Hopefully this will be a new incentive to all our regions to try and find and develop young players for 2020.

Many thanks to all our PE officials and members who helped with the organisation of our blue ribband event, the biggest tournament in England. Our sincere thanks too, to Isle of Wight Tours, our long-term and valued organisational partners. The full results including the ranking of each individual team in the respective competitions are now available.

It was fitting that at the traditional presentation we all marked the final Hayling for our retiring President Martin Eggleton and key tournament organiser Annette Eggleton with suitable acclaim. Thank you both for your fantastic contribution to our sport….and now the search begins for a new President as well as the preparations for 2020.