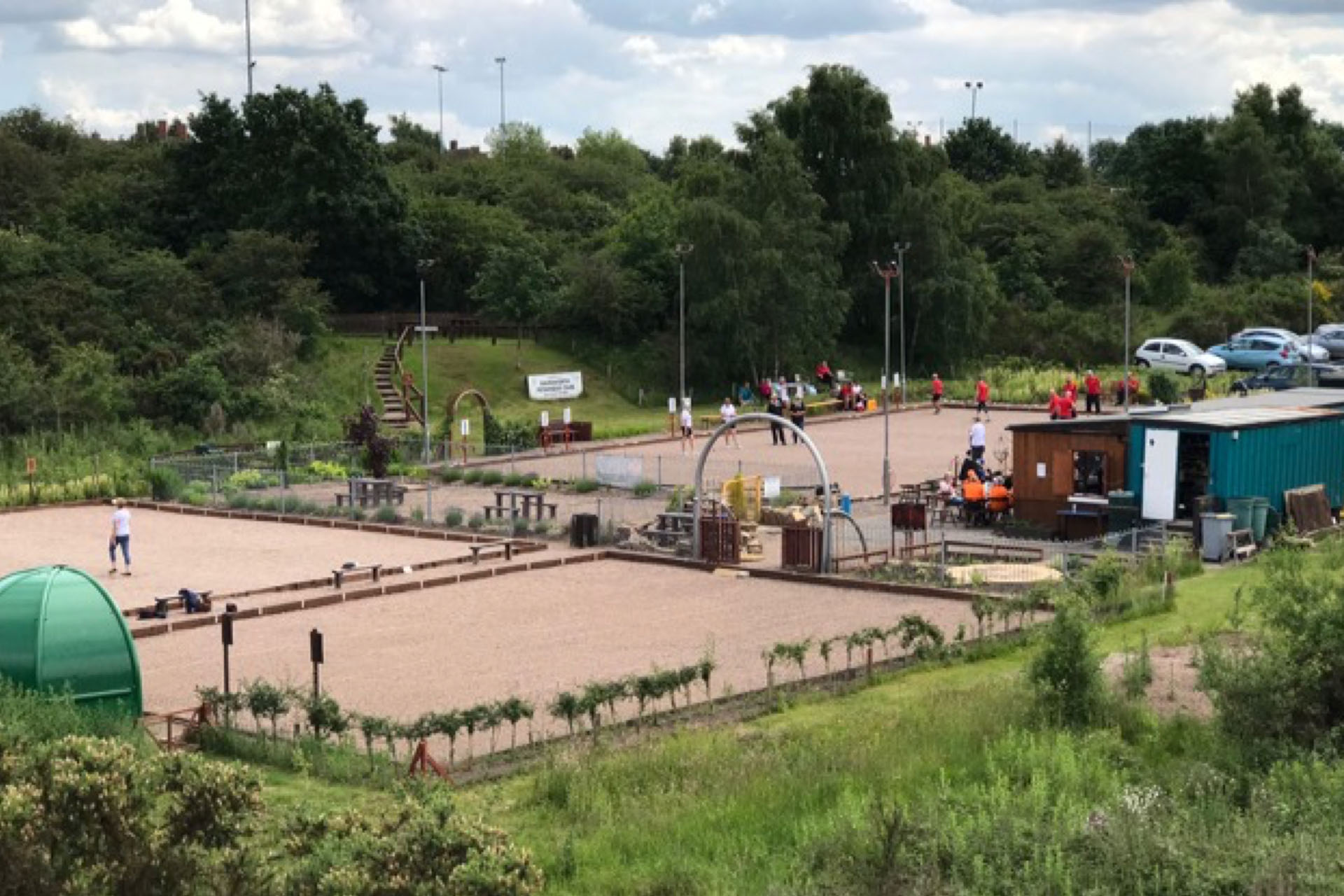 Hassi Leverett of PE’s Southern Counties Region gives her personal impressions of one of PE’s newer clubs, which we are delighted to count amongst our growing network. It shows what can be achieved with imagination and enthusiasm…

When I heard that the last of the Veterans Qualiﬁers was to be held at Rainworth Petanque Club, I had many questions swirling around my head: For starters – where on earth is Rainworth? How long is it going to take to get there? And is it really worth the journey for us soft Southerners to play in an unknown place “up North”?

I decided that I needed to take the plunge if I wanted the Ranking points for this particular competition, and discovered that Rainworth is near Mansﬁeld – yikes, that’s even more north than Nottingham! Although it’s really still the Midlands, that’s 200 miles north of us.

So was it worth the long drive to play in some strange unknown place called Rainworth? Absolutely yes. Okay, it did take a long time for us Southerners to get there, but only because of traﬃc – the journey back on Saturday evening was just a little over 3 hours so not bad at all.

And my goodness I was glad we went for it. The experience of visiting this gem of a Petanque Club was one I will cherish, as the place was an unexpected surprise and a total delight. We arrived to be warmly greeted at the entrance by Morris Goodman, known to many as one of our National Umpires. But very few know Morris as the brains behind (possibly) the best Petanque Club you’ve never heard of.

The club, just 3 years old, is set in a tranquil open space and nestled in lush greenery, with mature trees oﬀering shade and beautifully planted sleepers with variety of colourful ﬂowers. Up some steps is ‘Kestrel Heights’, a special picnic area with great views across all the pistes and there is a a verged lawn area for spectators to enjoy watching several matches at once. There is even a separate children’s play area oﬀering the young visitors a space of their own to play and indulge in a horseshoe game as an alternative to boules. Also under construction is a pond complete with ﬁsh, a solar-powered fountain and with plans to have a waterfall.

On the 18 international-sized terrains the attention to every bit of detail was second to none – good clear score boards, circles both ends, tape measures for each piste, marked lengths, subtly placed hazard notices and plenty of seating areas for resting in between matches.

Teas, coﬀees and other refreshments (including fruit!) were available in the converted shipping containers throughout the day. All the Rainsworth members welcomed us with warmth and encouragement.

Morris enlightened us on the story of how Rainworth PC came to be, on this previously derelict piece of land that was once part of a colliery. An ex-colliery-worker himself, he spotted the opportunity and negotiated an enviable 25-year lease giving him free reign over the space and the authority to be creative without the conﬁnes of red tape or rules so often hindering many Petanque clubs.

In just 3 years, Morris and his team have created an oasis of petanque and relaxation, a club with 75 members, in this little known place called Rainworth. I would deﬁnitely recommend this for future events and would encourage anyone to go and visit if you get the chance – you won’t be disappointed.