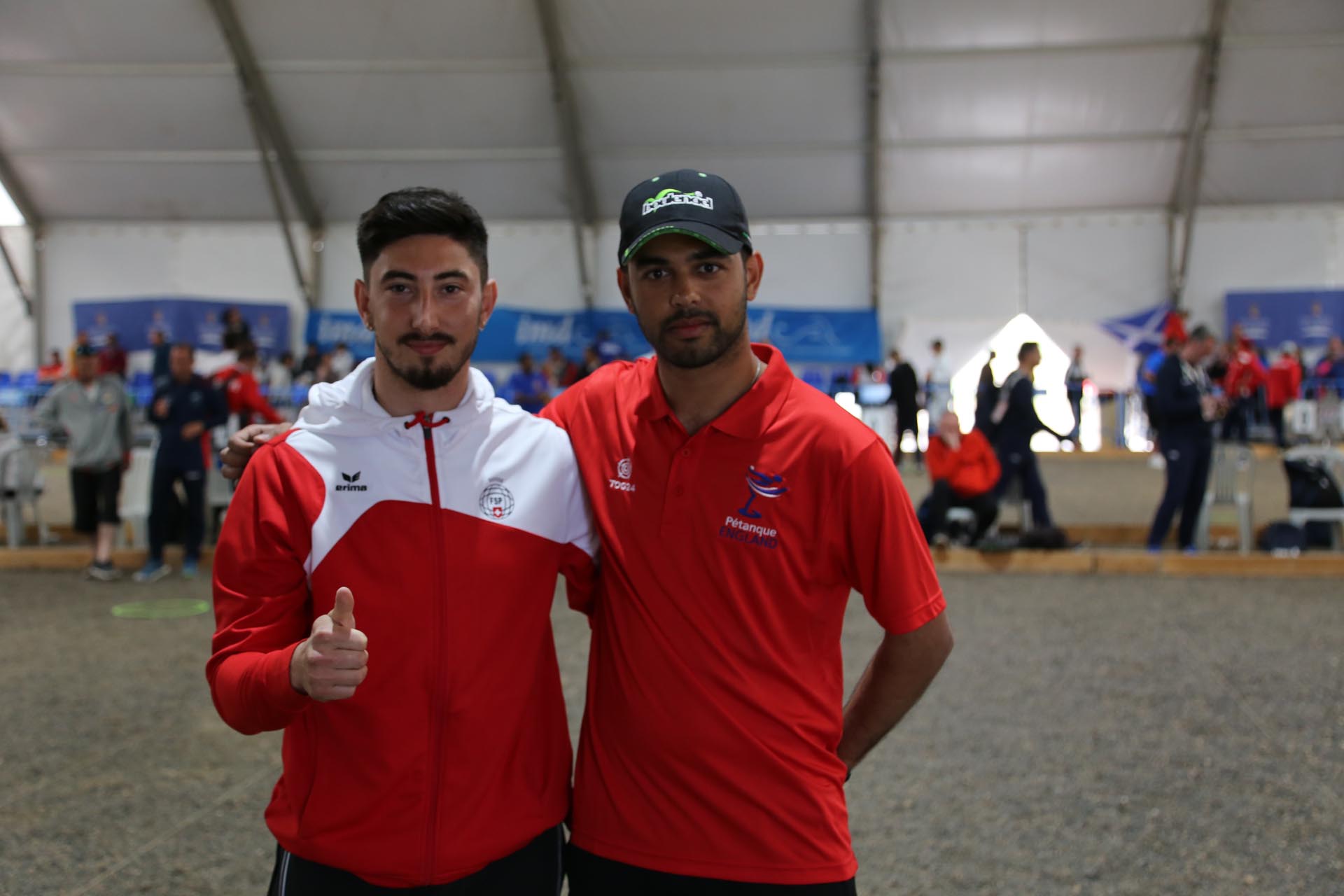 The England selection of Monty Quaia in the Singles and Monty and Sofiane Lachani in the Doubles proved that our nation can be very competitive at the highest level of our sport. They had two great chances in the fourth and final qualifying rounds to make the Top 16, but faced top quality opposition.

In the Singles, Monty consistently demonstrated the technical application of the high lob and backed this up with some effective shooting.

In Round 1 of the qualification, Monty had a comfortable win over the USA 13-7, although his opponent Jack Vijit performed well and shows that the sport is progressing across the Atlantic.

In Round 2, Monty faced Slovakia but won the match easily 13-2, maintaining control throughout. With two wins under his belt, Round 3 was always going to throw up a touch opponent and so it proved in the shape of Morocco’s former world champion Abdesammed El Mankari. Monty suffered his first defeat 2-13.

It came down to the fourth and final game to try and secure a spot in the Top 16 knockout stage. The draw was not kind as Monty faced one of the real rising stars of world pétanque, Maiky Molinas of Switzerland (cousin of Tyson Molinas). In an enthralling contest, where the two players battled it out virtually boule by boule, Molinas eventually prevailed 13-10.

The level of performance in the fourth match by Monty was underlined by the fact that just two days later, Maiky Molinas was crowned World Singles Champions after defeating Henri Lacroix of France in the Final 13-11.

Placed officially 18th in the World, Monty still only missed out on Top 16 qualification by a single fine BHN point as there were three players on two wins out of four and BHN’s of 10. Monty showed clearly at the tournament that he can compete with the very best in the world and will have learnt a great deal from the experience.

Monty and Sofiane started their Doubles campaign strongly with a routine win over Ukraine by 13-3. They then faced the formidable pairing of Joel Marchandise and Claudy Weibel, who have a host of titles in elite pétanque, including World Champions, World runners-up and European Champions.

In another riveting match, Belgium finally prevailed 12-10 in the timed game, but the England duo showed that they can compete with the very best.

In the third match, England faced Turkey, but held their nerve in a tight game to win 10-8 after once again the allotted one hour plus two ends was transacted.

As in the Singles, it came to a final match showdown with the Ivory Coast. This West African country is known for the brilliant natural ability of its players and Choaib Maiga and Fabrice Assan were England’s opponents.

The end of this match was absolutely thrilling but ultimately frustrating for England. The livestream of the match available on PE’s official Facebook page needs to be viewed to appreciate what happened.

Just after the whistle went for the hour England scored a great three points to bring the match back to 9-12 down, after Sofiane made a fantastic carreau with just two boules left at close to 10m. In the first of the two extra ends, things looked bleak for England as Ivory Coast outpointed England’s first point and England then went just past the jack with two further points.

With three boules left to the Ivory Coast’s five, there was a debate between Sofiane and Monty about shooting the jack. The advice of coach Nic Baxter after discussion with the team was to take on the point and trail the jack. The first attempt by Sofiane just went by, but the second was perfect, taking the jack back to hold four points and game.

Even though in a great position, Ivory Coast had five boules to rescue the position. Incredibly, the West African pointer shaved the jack and went through by some distance. The second and final point moved the jack to rest on our boule, leaving us still holding four.

It was over to the Ivorian shooter, Choaib Maiga but incredibly he missed once and then lobbed a point wide, still leaving game on the ground for England. It was the final boule that did big damage. Squatting down, Maiga threw the boule in low and pinged the jack back to hold four. Sofiane gamely tried the almost impossible four-boule removal as the boules were closely grouped together. It was not to be as Sofiane removed just one of the boules and England lost 9-13.

The quality of the West African pairing was later demonstrated by their Bronze Medal in the tournament, only narrowly losing 12-13 in the Semi Final to Italy.

Two of the teams England faced qualified for the Top 16 and although winning two out of four, we were finally placed 31st. Were it not for devasting final boule from Ivory Coast, England would have been in the knockout stages.

Nic Baxter coached our Men throughout the tournament and was always on hand to give sound advice and support to our players. Thanks Nic, for everything you did to ensure that our team had the best backup, ensuring that players and coach operated as a tight unit.