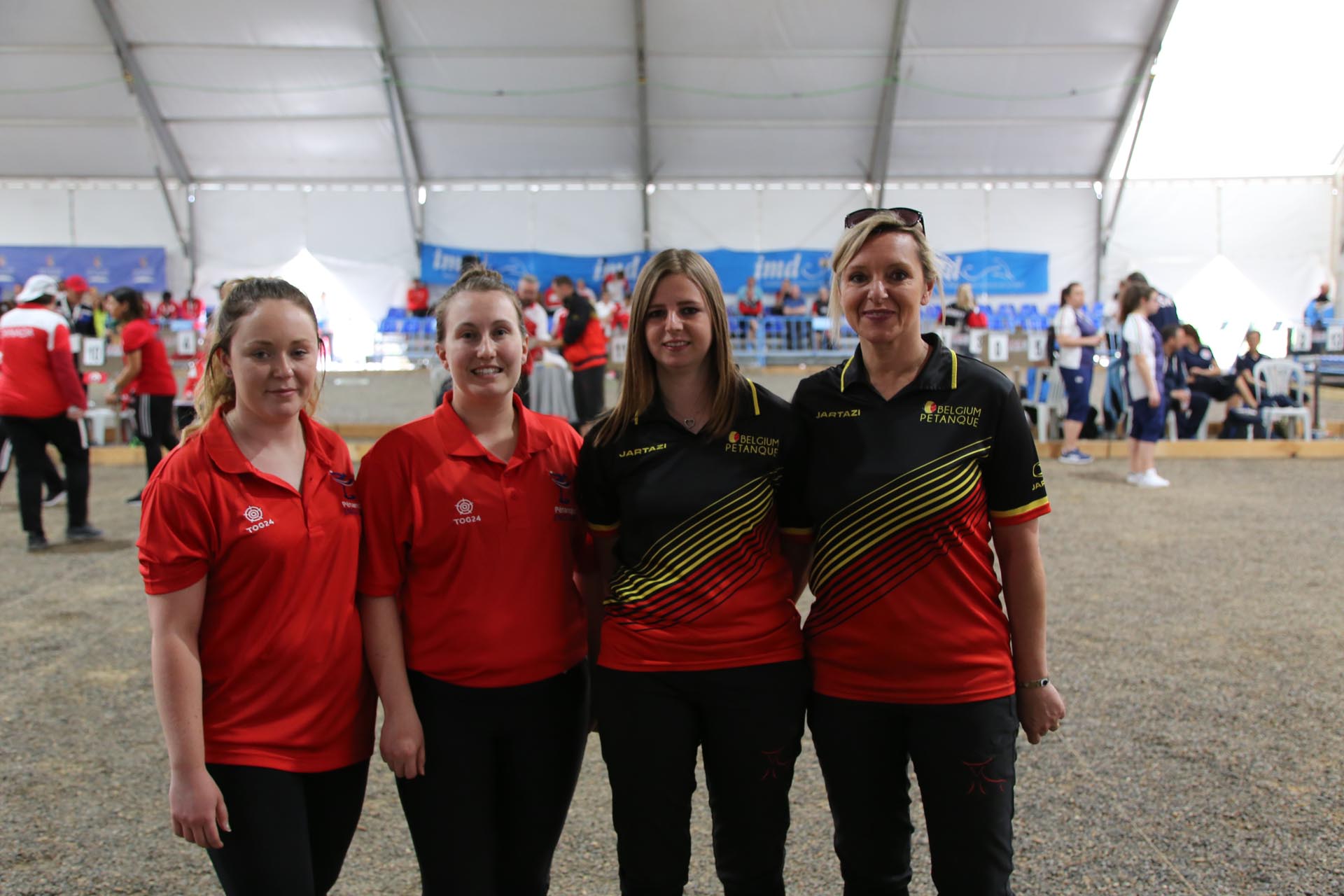 Emma Longstaff and Sammy Thatcher were PE’s selection for the tournament and they proved that they fully merited their England call-up, achieving an historic Top 8 ranking in the World.

The England pairing began the tournament very well by defeating a strong Luxembourg team comprising young talent Indira Ongaro (16 years old) and Nathalie Damarge. Luxembourg have always been a tough prospect for England at international level, but our team prevailed 11-9 in a close battle which could not be concluded without extra ends.

In Round 2, England were drawn against Bulgaria and never looked at all under threat, despite the Bulgarian team’s ability to throw a very good final boule consistently. The 13-7 victory set up a third round contest against the similarly undefeated Czech Republic, where England dominated to win 13-7.

After three rounds, the Swiss rankings showed that England were placed in top position, a tremendous sight for English eyes.

Three wins meant guaranteed qualification for the Top 16 before the final round, a feat which has not been achieved by England in a World Championship.

The fourth and final round pitched England against Belgium, both on three wins out of three. Playing for Belgium were Nancy Barzin and another young European talent of our sport, Jessica Meskens. The Belgium pairing was well-known to us as we encountered them at the Maaseik tournament last year, where Sammy Thatcher and Claire White had emerged victorious in a match.

The Belgians proved to be too strong on this occasion, winning 13-6, but England still ended up being placed 5thafter the qualifying rounds and the seeding meant that we would play the People’s Republic of China on the Saturday morning.

In many respects, China are a bit of an unknown quantity, having only recently started competing at world level. They were the hosts of the World Women’s and Youth Championships in 2017, showing the nation’s growing interest in our sport. With a huge population and state resources at their disposal, you expect China to be a force for the future.

England really showed their class in the match and totally dominated it from start to finish. Our country’s second fanny of the tournament saw us comfortably into the Quarter Finals.

The arrival in the Top 8 of a World tournament meant that England was entering new territory. The most recent opportunity to make the Top 8 was in the Women’s Triples World Championships in China 2017, where a loss to Italy in a deciding game had prevented our team of Sarah Huntley, Emma Longstaff, Kaylee Thatcher and Sammy Thatcher progressing. We were just one game away from a historic medal at World level, last achieved by Claire White (nee Scott) and Nicki Scott in 1988 when the Women’s World Championships were played in the Doubles format only.

Our opponents for the medal were Canada, with team members Maryse Bergeron and Kassandra Dufesne. Bergeron is well-known in international pétanque for her unconventional shooting action and for her strong international record having won three bronze and one silver medals in precision shooting in World Championships.

Having waited several hours for the game, England struggled in this match. After initially taking the lead, our team fell behind and never recovered, finally losing 8-13. Canada went on to lose to Sweden in the Semi-Final, securing the bronze medal that was so close to being in English hands.

This result was the best achieved by England at World level in any format of the game for over 30 years excluding precision shooting where we have Bronze Medals for both Sarah Huntley (2011) and Vanessa Webb (2006).

With further application and support, our female athletes can progress further and PE will be reviewing what more we can do to get to the next medal-winning stage which was tantalisingly close this time in Spain.

Our coach Rowland Jones should also get full recognition as an important and integral part of the team’s success. Rowland performed the coaching role in Canada for our Men in 2018 and now has continued in 2019. His calm and always supportive stance along with his excellent reading of the tactical side of the game has proved invaluable.