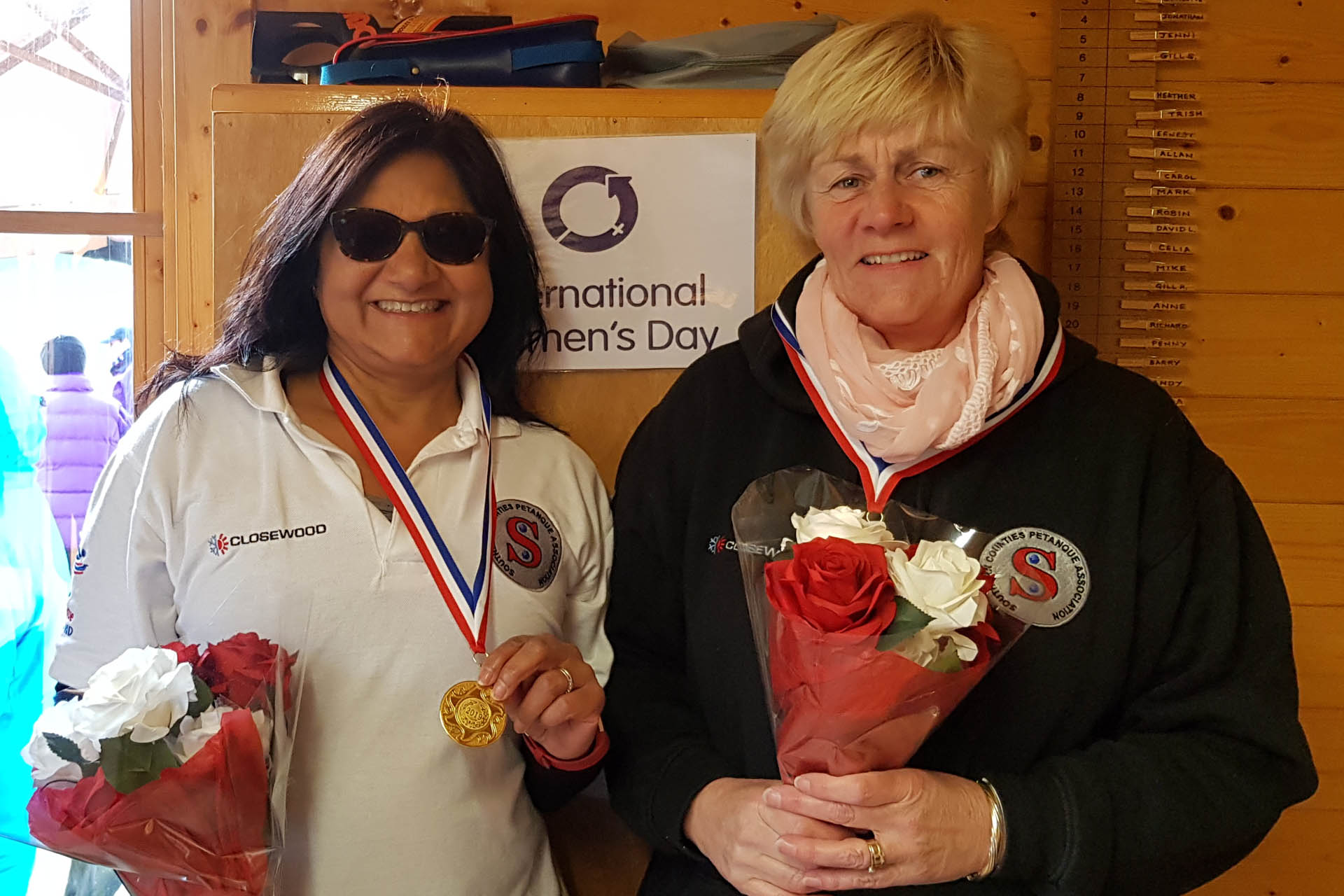 Sunday 14th April saw the very first National Women’s Doubles to celebrate International Women’s Day (IWD).  This newly launched initiative was the brainchild of Hassi Leverett of PE’s Women in Petanque group and is aimed at encouraging more women to participate in competitions at regional and national level.

Following the regional IWD qualifiers hosted by nine regions (Chiltern, Devon, Eastern, Great Western, Heart of England, Kent, London, Mercia, and Southern), 32 teams were invited to the National IWD Finals at Oxshott PC.  The diversity of players ranged in age from the youngest player Francesca aged 12 to a number of older ladies in their 80s.  Players also ranged in experience from some of the top and most seasoned players to those for whom this was the first time of playing outside their own clubs and regions.

Teams started arriving soon after 8am on this cold, brisk day and by 9am all 32 teams were present, with competition organiser Annette Eggleton fully set up and registration under way.  The atmosphere and tone of the day was very much in keeping with the ethos of celebration and to create an enjoyable but highly competitive competition.  The eight leagues of four soon kicked off creating an exciting buzz in the air and the start of a long day for our most personable of umpires – David Mason.

The afternoon knockouts comprised the top team from each league qualifying for the Gold, second in the Silver, third in Bronze 1 and the bottom team in Bronze 2.  The strength of the teams in some leagues meant positions were determined on the smallest of point differences.

The Gold saw teams from five of the nine regions qualifying (Chiltern, Heart of England, Kent, London and Southern), resulting in some tough games being fought in the afternoon in a bid to win the prestigious IWD Trophy for their Region – with the odd  surprising result.  Similar representation of regions in the Silver and Bronze categories also led to strong matches as each team gave it their best shot to take home the winners medal.

For teams that lost out in the first match of the afternoon, there was the option of playing in the plate competition which many opted to do as it gave them the opportunity to enjoy an extra game and forging new friendships.

Along with the 64 women in play, there was a great number of spectators and supporters from the regions who had travelled to Oxshott with their teams.  They definitely added to the ambience of friendly fun and banter and many stayed on to spectate until the end. The club house at Oxshott offered a great lunchtime service and refreshments throughout the day.

The winning teams of this inaugural event were:

The IWD Trophy will be presented to the winning team at Hayling Island in September.  Here’s to 2020 and bringing a few more regions into this great new competition.