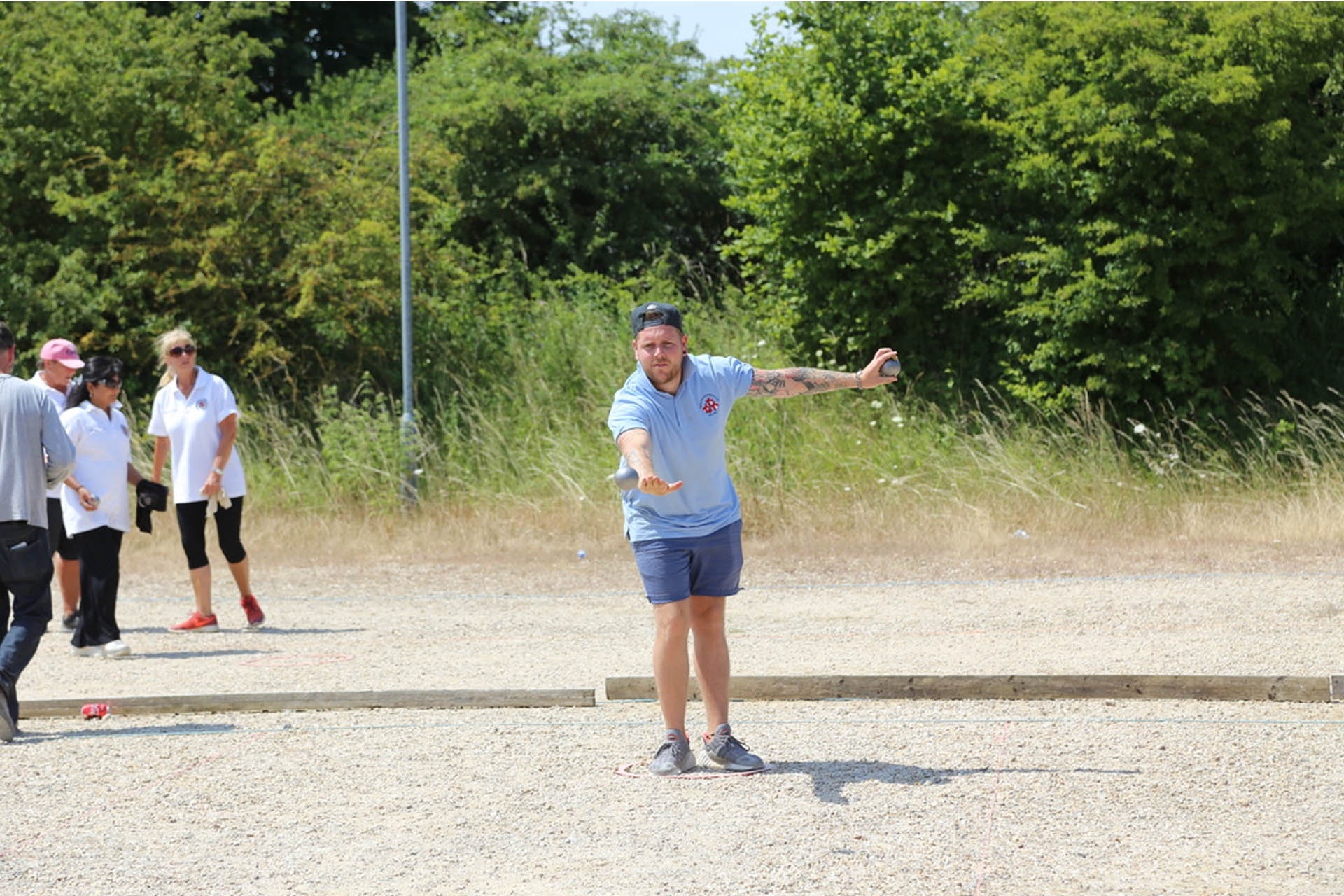 It’s brilliant to see 54 teams descending on Gravesend to battle it out for the coveted National Title. This event brings together the best of England and last year’s winners, National Men’s Squad players Ross Jones and Sam Blakey, will be looking to make a successful defence of their title.

Jones and Blakey were convincing winners in 2019; They were no.1 seed after the league phase and continued their great form through to the final, defeating Sofiane Lachani and Monty Quaia 13-1.

Jamie Brooks & Callum Lombard alongside Jeremy Huntley & Keith Flack were losing semi-finalists – they’re back and can they go one better this year?

There will be 12 leagues of 4 teams and one league with 6 teams.  After Wednesday’s live draw hosted by Barry Wing, with no seeding this year, the league’s conjured up some mouth watering ties and an almighty ‘Group of Death’.

The order of play will mimic the singles:

Two somewhat legends of our sport, Nic and Sofiane, team up in this year’s event. Sofiane was losing finalist in 2019 but has opted for a new partner in 2020, hoping to propel him to the title. Josh and Thomas are playing together once again and will look to build on 2019’s performances, where they met Sofiane in the League.

The two remaining teams didn’t feature last season and this will make this an interesting group for all four parties.

League 2 is a very difficult group to call. I’d like to think that my pairing with Jack will be the team to beat but we have an interesting final match of the group versus Paul and Dean Webb -which could be pivotal to a place in the Gold. We may have the pedigree but Dean Webb has shown his credentials alongside his dad, Paul, on numerous occasions. Jean-Louis and Bobby can cause an upset in this group while Richard and Mark will be hoping to put the cats amongst the pigeons with some solid boule. A tough group.

League 3 will be another group that has the possibility of all ‘beating each other’. Adrian and Keith probably have the most experience and Keith was a losing semi-finalist in 2019. The 3 other teams look likely to be battling it out for that 2nd place position but nothing is guaranteed in this game and they will all feel they can make the Gold. Worth watching how this plays out.

A real battle in League 4 with some interesting matches in store; and a very continental feel to the teams involved. Vince is with the talented Dinesh and these two look a real handful. The pair will be hoping to reach the higher echelons of the doubles, however they will have to navigate through a very tough group first. Biagioli and Dahmani come with danger and the duo are not to be taken lightly, both good players. Kent’s Tim and Steve are also capable of getting into the Gold and will be looking to take some scalps in this group.

A league that you can also say is very wide open and four teams all in with a shout of getting through. All eyes on the youth duo of Angus and Archie as they battle it out against some of the country’s most experienced players. Will the fire power of Josh Tombleson be enough to propel his team through to the Gold or will Jason & Matt have something to say about it? A very tough group to play in.

England serial winners and Baldock Town teammates Matt Eversden and Sean Prendergast look like being the team to beat from this league. The twosome come with a wealth of experience and pedigree and look certain to be in the reckoning for the title. Thierry and Andrew are more than capable of making the Gold and will be chomping at the bit to face Matt and Sean. The young pairing of Jake Watson and Sean Daisley will be excited to compete against such opposition and will be looking to make their mark.

Another very tough looking league. All four teams have the capabilities to achieve success this year. Monty was last year’s runner up but returns in 2020 with top shooter, Phil Claydon. Northern double act, Matt and Lee are a very consistent team and can give anyone a game or beating! Tony & Jeff and Ivan & Mal will be hoping to be on their ‘A games’ in what promises to be an exciting group.

Another open group which will be hard to call. All teams in this one will be excited of the prospect of making the Gold. Nick Goodheart is the most experienced of the 8 players and he will be hoping that his years of top level boule will help himself and his partner come through league 8.

Greg and Phil were beaten in last year’s first knock out round and will surely feel they can go better this year. Greg is a talented shooter while Phil has been one of the best players on the circuit for many, many years. Michael and Theo have great track records at titles and they will have something to say on who comes through from league 9. Nouri and Mo are two very experienced players and will need to call on all of their experience to make it through. Ameen is a very capable player and teaming up with James sees another team of real capabilities involved. Once again, another interesting group for the 4 teams.

And here it is – the ‘Group of Death’! Four teams drawn against each other who all have dreams of winning the tournament – but something has to give.

Reece and Rowland have formed a very formidable doubles over the past 12 months, playing a lot together through the Men’s National Squad, while brothers Dean and Scott know each other’s game inside out and their consistency will be key. Jamie and Callum are 2019 Semi Finalists and will be hoping to get through this group and make a statement and go all the way. The Woodward brothers are more than capable of prevailing and I am convinced they will be licking their lips at such a league. League of the year! PE VP Martin Hughes is bound to be looking with relish at this league for some morning live-streaming.

A very open group this one. All four teams will be looking at this league and believing they can make the Gold. A very experienced group of teams and it may be the team who plays best under pressure that comes through this.

England Men’s Squad players Jeremy Huntley and Jason White team up for this one. The talented individuals are a team to reckon with as they start their assault on the doubles title. They will have to navigate through three tricky ties to have a say though. Kent duo Andrew & Mat and Southern pairings Bob & Paul and the Kidds, will all be looking to take wins off each other and get that big scalp against the England men.

Last year’s winners will be looking to build some confidence in the group stage as they look to defend their title. It won’t be easy however, as a group of 6 teams tends to be little trickier to navigate through. The experience duo of Patrick and Jean-Denis will be a tough nut to crack for anyone while England youth player Baillie has shown enormous promise over the past year and, playing with his dad, Martin, they are definitely a team to watch out for. Another team who will be looking to win the tournament from this group is stalwart Barry Wing and Neil Phillips. The duo are going to take some beating.

All the best to all our teams in this quality Doubles field. Thanks for supporting our first major venture back into national competitive play. Enjoy your day and play safe!