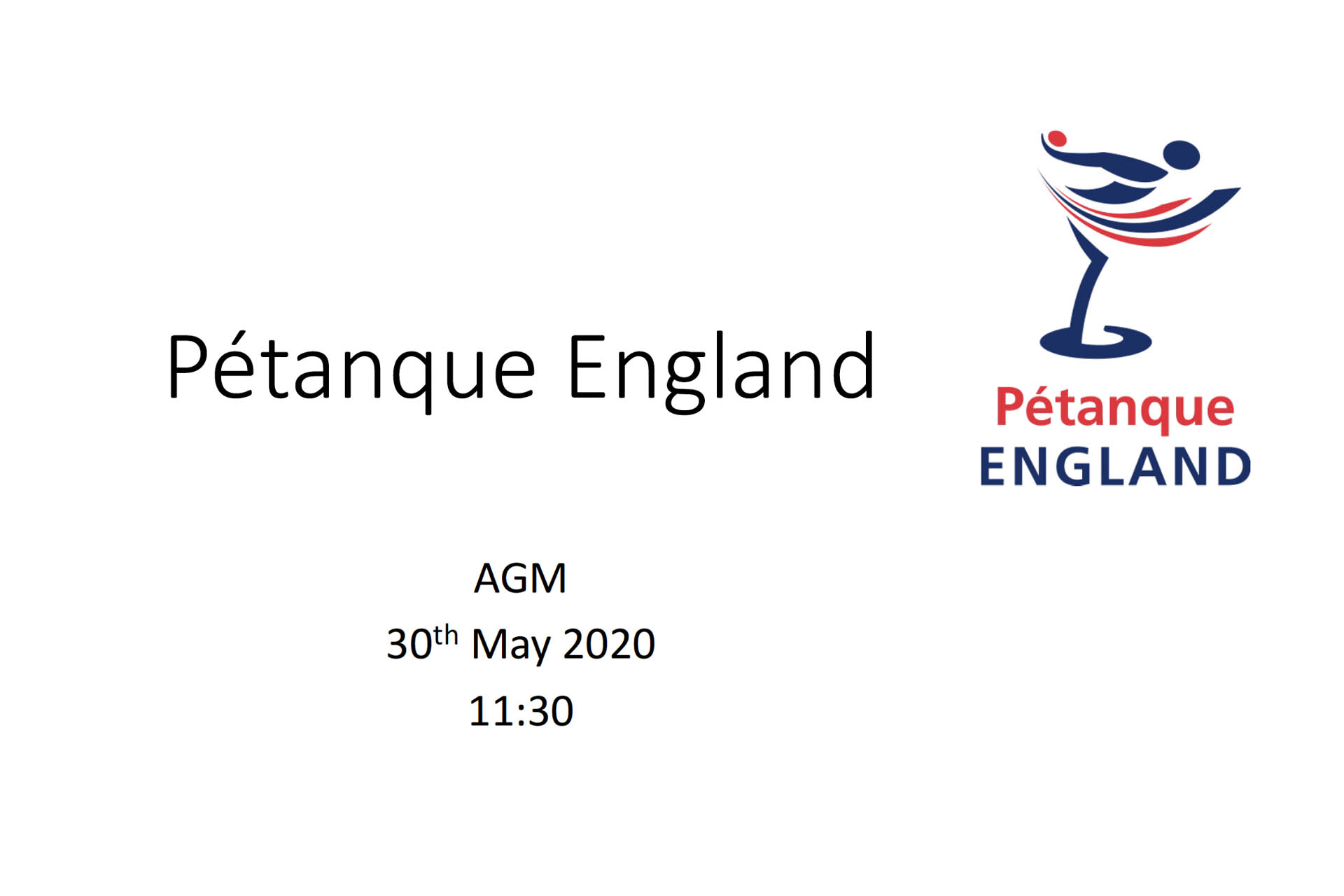 Outgoing PE President Martin Eggleton completed his final duty in office as he presided over our 2020 AGM on Saturday 30th May.

Due the restrictions on public gatherings, the AGM was held virtually and made available for members to watch online via Zoom. Key decisions on resolutions to appoint the new President and Board Members as well as approval of the annual accounts and membership fees were made by the use of proxy voting. PE Members submitted their proxy votes online via the membership system or by sending a completed form by email or post.

Martin talked about his five years in office and some of the achievements and changes experienced by our sport. He noted in particular the creation of Petanque England under the new legal structure which left our governing body in a position of strength to face the future. You can read the Annual Report, which includes Martin’s personal comments.

Although members could not speak at the AGM, the the Zoom chat facility was used by members present to pay tribute to Martin’s work and the support of his wife Annette, also a PE Board member and retiring after the AGM.

Members who missed the live stream can catch up by downloading the video and playing it back at their leisure. Comments on PE’s official Facebook page afterwards suggested that the ability to watch the AGM live in future years for members who can’t physically attend the AGM should be considered.

The appointment of Martin’s successor was one of the key items for the AGM and he noted that there were two excellent candidates in the shape of Clive de Silva and David Mason. After counting the proxy votes submitted, Clive was declared our new President and takes over with immediate effect. You can read more about Clive and his plans for the future here and we wish him all the best for his term of office.

Given that Clive had been appointed as President his votes in the separate PE Board election were excluded as he joins the Board by virtue of his position. This left eight candidates to contest the five places on the Board that were available.

It was a particularly close vote with only one vote between the fifth and sixth placed candidates, but after verification, Toni Gates, Barry Wing, Christine Spray, Alan Roden and Janice Keemer-Richards are to join the Board. Toni, Barry, Chris and Janice are all new members and it’s particularly welcome that there is now a greater number of women on the Board.

You can see all of the votes cast here.

The Board will be losing the sixth placed candidate, David Mason. David has dedicated a lot of his time as a valued Board Member. He has made an effective contribution to the organisation of national events as well as vital work recently to ensure that PE was not faced with significant financial liabilities associated with the sad cancellation of our 2020 Inter-Regional Championships. Our thanks go to David for all his work for our sport.

The President and new Board will meet virtually for the first time on Saturday 6th June where plans to emerge from the COVID-19 epidemic will be discussed.

previous
COVID-19 - Update and Play Safe Guidelines
next
Members’ Consultation – give us your views!