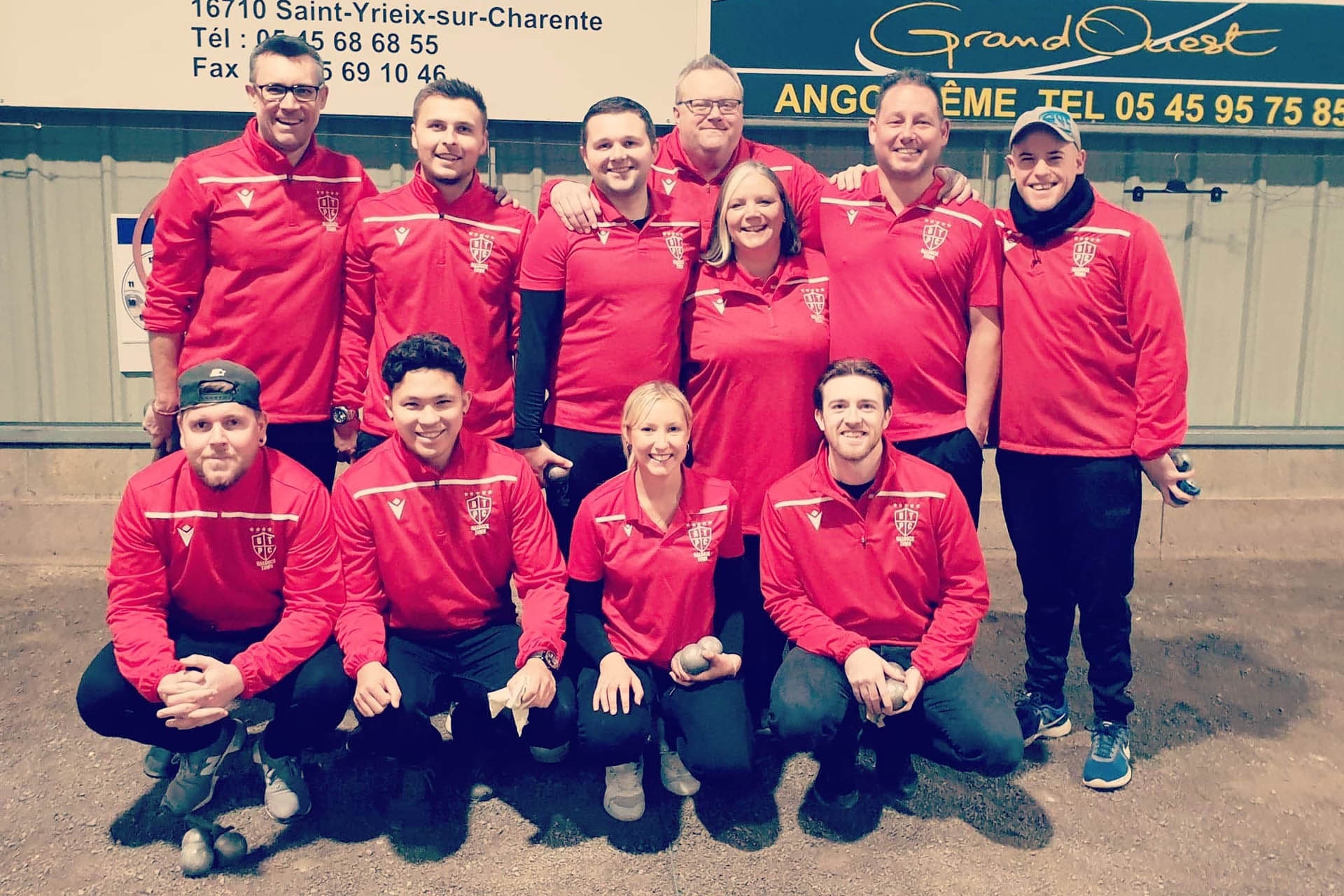 At the end of first day of the EuroCup Finals in Saint-Yrieix-sur-Charente, England’s champion club, Baldock Town find themselves well placed make the top eight of the competition after one win and one defeat.

In the first round this morning, Baldock faced Brno from the Czech Republic in Poule 2 and started strongly, taking five out of the six Singles matches worth two points each. Emma Coggins prevailed 13-8 in the all-female tie, while Sean Prendergast stormed to a 13-0 victory in his match.

With 10 points in the bag, the task was to win two out of the three Doubles matches worth three points each to take the round without having to play the two Triple matches. Matthew Eversden & Jack Blows and Sean Prendergast & David Plumhoff duly obliged, winning their respective matches 13-9 and 13-8. The close defeat 11-13 of the mixed doubles pairing of Sarah Huntley & Sam Blakey became academic as Baldock chalked up the winning 16 points out of the 31 available.

In the other match in the poule, Italy totally dominated their Hungarian opponents, winning all of the Singles matches and all of the Doubles to end up victorious by 21-0. This meant that England would face Italy in the second round after lunch in the winners v winners match where a second win would put the successful club through to the Quarter Finals.

Italy have always been a powerful force in international elite pétanque, and they began very strongly with victories in all of the six Singles encounters. although both Jack Blows and Matthew Eversden only lost out narrowly by 11-13 and 12-13 respectively.

At 0-12 in the round, Baldock knew that they had a mountain to climb to rescue the contest and could only afford to lose one of the remaining three Doubles matches and none of the Triples matches.

The Doubles round started with some controversy as the Italian club forfeited the match involving Sam Blakey and Reece Gould, apparently for listing too many players – only eight are allowed on the team sheet in each round. This meant that to stay in the round, Baldock needed to win one of the other two matches.

In the mixed, Jack Blows and Sarah Huntley were in a tight contest which was pretty much even throughout, but their Italian opponents eventually won 13-10. It was left to Matthew Eversden and David Plumhoff to keep the round alive. They faced Fabio Dutto and Erik Galanti, the former being in the Italian Triples World Championship team in 2010 In Turkey, meaning that Matthew was reunited with an adversary from the top 16 stage of that tournament. England had failed to trouble the scoreboard on that occasion, although our Men’s Senior teams have not progressed further than this position in the Triples World Championships since.

He’d waited more than nine years for a return match and this time with strong shooting from his partner, Matthew got his victory by 13-8.

At 6-15 down in the round, Baldock could still qualify automatically by winning the two Triples matches, but Sarah Huntley, Sam Blakey and Jack Blows couldn’t get a foothold in the Mixed and lost 2-13, while Matthew Eversden, Reece Gould and David Plumhoff just lost out 11-13.

Baldock had to wait some time for the outcome of the round between the Czech Republic and Hungary, but a re-match was set up for England in the barrage after the Czech Republic defeated Hungary 17-9 with the final Triples halted because there was no need to complete it.

Baldock will definitely have the psychological advantage having already won comfortably against the Brno club but they will be taking nothing for granted when the barrage round starts tomorrow (Saturday) at 0830 local time (0730 UK) with the Singles series of matches.

A second victory will take our country to new heights in the EuroCup as we have never reached the final eight of the competition. We wish our champion club all the best in this important match. If they win, they will secure a Quarter Final match against the champion club of Luxemburg, BP Riganelli after they topped their Poule.