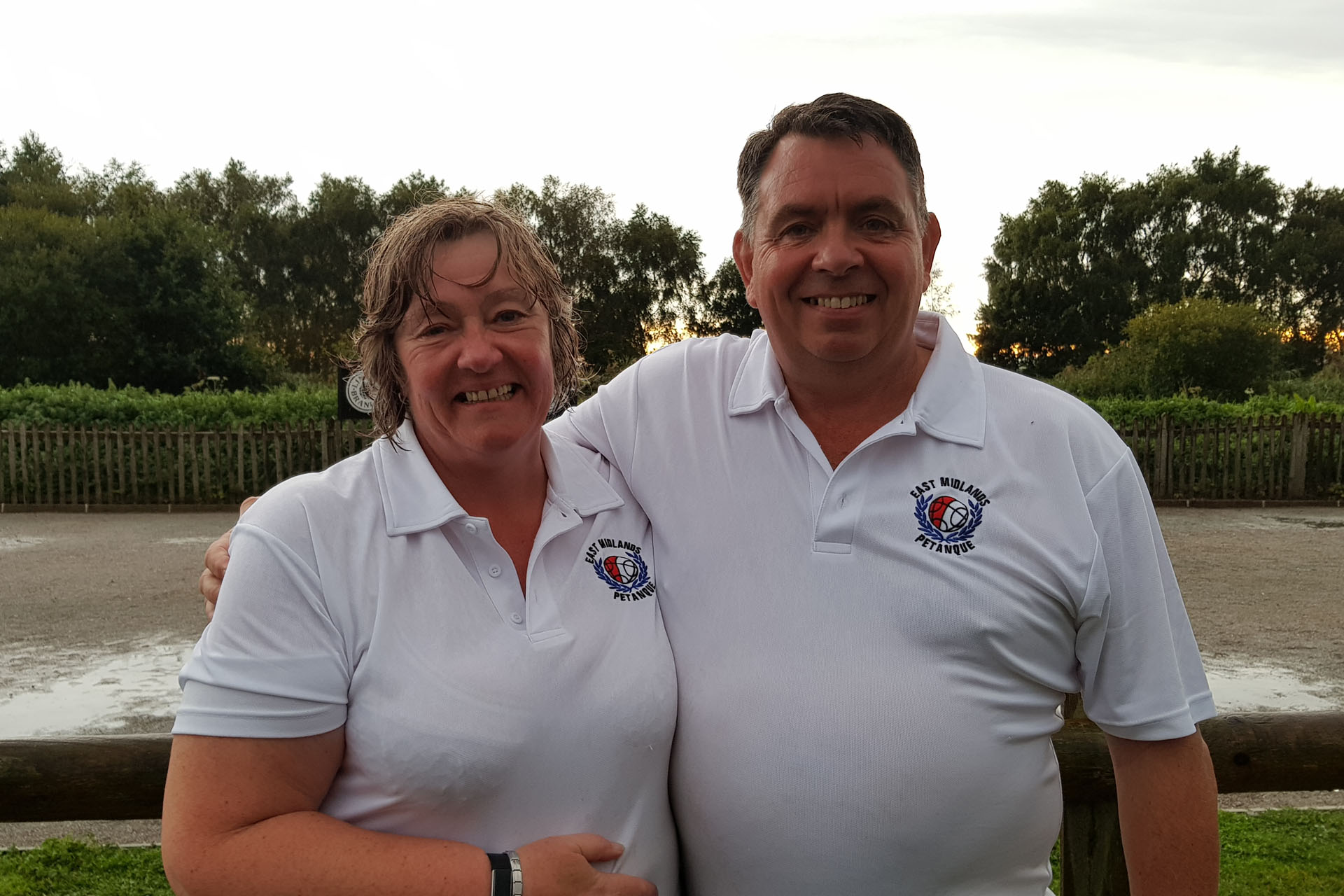 Annette Eggelton reports from another popular PE weekend, which combines an Open Doubles and the Champion of Champions for our players aged 50 and over.

On a beautifully warm and sunny late September day, 30 teams took part in this event on Saturday 20th September at a lovely canalside venue near Lincoln. Indeed, due to a small post code typo, some had a little tour of the beautiful city.

The playing area at the Lincoln Branleys club is a large, single space terrain that is easily divided into a variety of number of pitches. The setting, next to the Fossdyke Navigation canal, in the grounds of a Marstons pub with adjoining hotel and nearby marina was fantastic and provided just about everything you could want in a venue, although the one big thing missing would become relevant later in the day.

It was leagues in the morning, with the top 2 from each league, 16 total,  going in to the main and 14 in the plate. Unfortunately, one or two very long “morning” games meant that knockout stages didn’t start until nearly 3pm. Could I just say, that although the rules allow a minute per boule, you really don’t have to take 59 seconds for every shot!

This led to a very late finish for the main competition, with various cars being used to provide a small but very useful degree of illumination. As all the participants in the plate competition were going to be taking part in the Over 50’s Champion of Champions on Sunday they decided wisely to call a halt as dusk descended and restarted on Sunday morning before play began.

Many thanks to Morris Goodman for his umpiring and to Martin Eggleton who helped out on the organising front and kept Morris and I supplied with tea.

The full results are available.

Over 50’s Champion of Champions (Doubles)

The Lincoln Branleys club played host to a second day of competition, and again the day dawned bright and sunny.

20 teams, representing 13 Regions, arrived to play in this event. Only the winners and runners up from each Region’s over 50’s championships are eligible to take part in this event.

As the weather forecast was not promising for later in the day, and we didn’t want to repeat the car battery draining of Saturday, it was decided that we would play 5 leagues of 4 teams, the winners of each league and the next best 3 would go in to the main competition and the remaining 12 could play in a plate competition if they wanted to enjoy the great venue for a bit longer. In the end 4 pairs decided to head home, some having long journeys ahead of them.

The afternoon competition got underway a bit earlier than Saturday too, at around 14.15. A few short showers accompanied the first few rounds but as the plate final between Sussex – Tony Mann & Jeff Mitchell and East Midlands – Kath Brooks & Christian Seville, the rain came. And boy, did it arrive with a vengeance. After playing for a little while, with the score at 4-4 and only pride to play for in this event, the plate participants decided that pride comes before the flu and that they would abandon the match.

In the main competition, Chiltern’s Steve Zimmerman regretted his oversight in not packing a coat when he was quickly soaked through, struggling to ensure his boules were dry enough to control when it was his turn in the circle.

As the final began the weather front moved through and the last match of the day was played in much more pleasant circumstances. Heart of England – Bill Wood & Ian Williams took on East Midlands – Michelle Roe & John Edmondson, with Michelle & John emerging victorious by 2 points.

The full results are available.

Once again Morris Goodman was the umpire of the day and Martin Eggleton did a great job of chauffeuring me home, with a beautiful sunset illuminating the start of the journey.

Lincoln Branleys Pétanque Club provided a great venue and very warm welcome. If you get an opportunity to play there I would heartily recommend it.