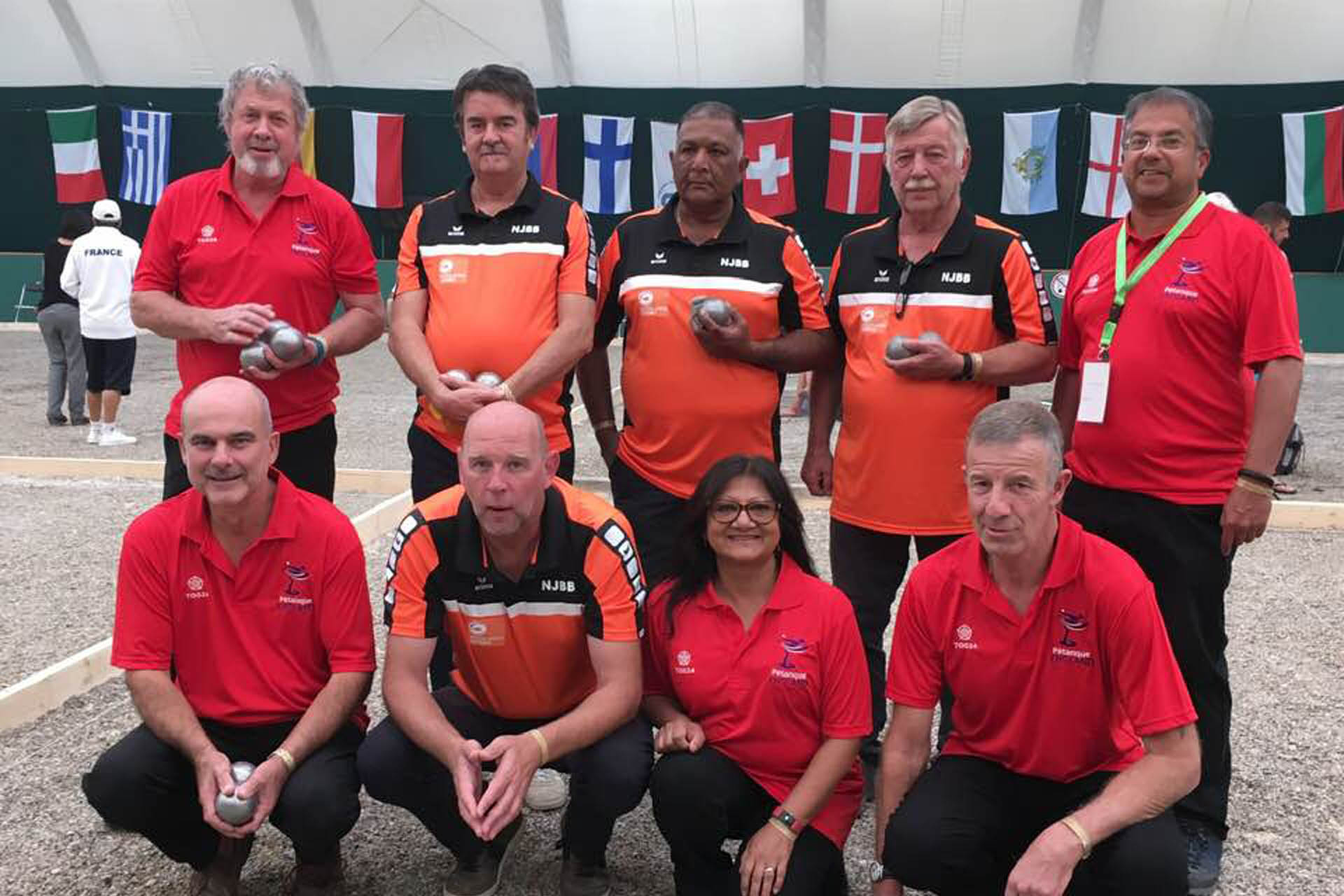 England’s Veterans (+55) team comprising Ian Barnes, Simon Bird, Cliff Campbell and Hassi Leverett completed their campaign at the biennial European Championships in Albena Bulgaria with qualification for the championship where the top 16 nations out of 28 battled it out for medals.

The tournament began with the usual timed five rounds of Swiss, the system which seeks to pair teams in each round on the same wins and losses. You never know who you might draw from round to round which provides a complete contrast to poules or barrage when you know who is in your group.

In round 1, England faced Estonia and got just the start they were after with a 13-7 victory. The draw then led to a second round match against Ukraine who had defeated the Czech Republic 12-11 when time ran out. England maintained their momentum with a solid 13-6 win, setting up a third round tie against Finland.

This was quite a favourable draw as it was a ‘crossover’ game where the Swiss system pairs a team on two wins with a team on one win and one loss. Finland had lost to Wales 10-13 in the first round but had bounced back with a resounding 13-0 win over Turkey.

Unfortunately, Finland carried forward the boost of the fanny and achieved a convincing 13-4 win over England. As the tournament progressed, it became clear however that Finland might just have had a cold first game, as they went on to win four out of five in the Swiss and progress through the poule stage to reach the quarter finals where they eventually lost to Poland.

That concluded the action for day one, and England returned the following day with a fourth round match against Denmark, a country which has a very strong set up in all age and gender categories. The Danes had the same two wins, one loss record as England, having beaten Latvia and Jersey 13-6 and 13-1 respectively in rounds one and three, but losing 11-13 in a tight game against Germany in the second round.

England pulled off an excellent win 13-7 and with only 28 teams competing, the team had assured their progression into the top 16 of the Championship, an objective that PE sets for all of its elite teams performing at this level.

The final round of five saw England pitched against Germany, also with a three wins and one loss record, having defeated Greece, Denmark and Belgium and losing to Monaco. It was always going to be a challenging tie against a country that has made major progression in the sport in recent years, and England was unable to get going and secure the fourth win, losing 1-13.

The ranking table after five rounds showed England in eighth position, a strong showing for the team. The Buccholz (BHN) score of 15 also demonstrated that England had faced stiff competition, their opponents scoring an average of three wins with Germany and Finland in particular having chalked up four wins each. The table showed that only three other countries had faced tougher opponents.

The barrage group that was constructed from the rankings brought together those teams in first position (France), eighth position (England), ninth position (Holland) and sixteenth position (Wales). This was a tough draw as France contained two legends of the sport who still compete at the very highest level, Marco Foyot and Christian Fazzino, while Holland were the defending champions from 2017.

In the first barrage game it was 8th v 9th so England faced Holland. This proved to be too big a task for England and Holland won convincingly 13-4. With Wales getting fannied by France, it meant that England would need to win against Wales to maintain interest in the tournament.

It was not to be, with Wales winning the Home Nations showdown 13-9 and securing the barrage play off against Holland who lost a close game 9-13 to France. In the event, it was Holland that progressed to the Quarter Finals with a 13-2 victory over Wales.

Holland eventually ended up as bronze medal winners and France took gold, after defeating Sweden 13-4 in the final.

In PE’s 2019 Playing Programme, we set a primary objective of a Quarter Final place in the Tournament as we had achieved that in 2017, but this was established before we knew that France and Belgium were competing, they had not done so previously.

We should always take considerable satisfaction in competing in the final Championship stages of a European tournament in whatever age or gender category, and the team acahieved that. Well played, Cliff, Hassi, Ian and Simon and special thanks to coach Clive De Silva and Head of Delegation Chris Spray. Clive has worked hard this year to bring a better structure to our veterans setup and later this month a squad will also go to Guernsey to compete in an open there. We’ll cover that on social media and on our website.