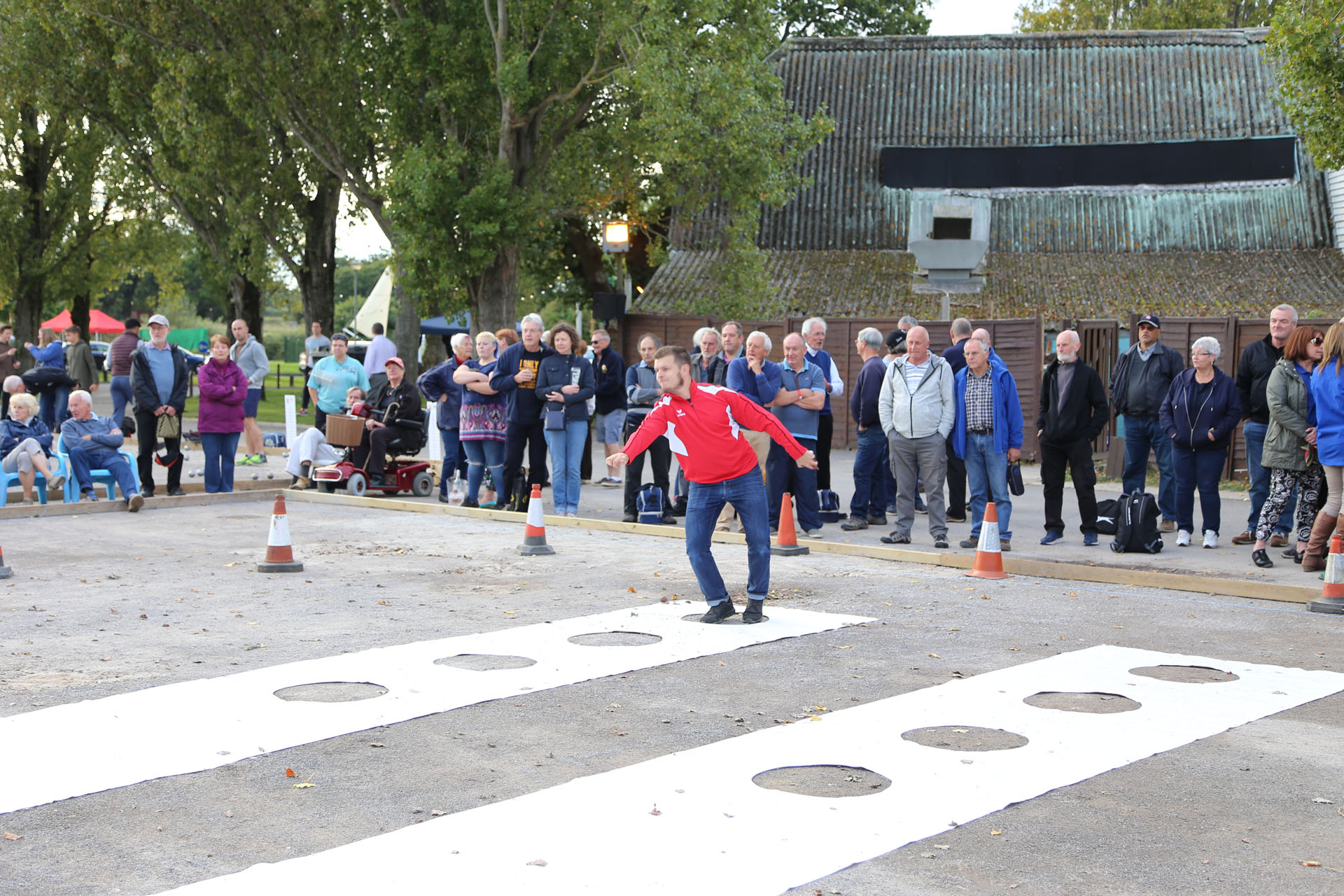 Much to everybody’s relief, the weather looks set fair for the main PE event of the year – the Inter-Regional Championship and Challenge Tournament.

Today, players and supporters from all over the country will descend on the Mill Rythe Holiday Village on Hayling Island ready for two days of highly competitive boules. The off-piste social aspects also play a massive part at this huge gathering.

A team of PE officials as always has been working hard on the preparations which involves the creation of around 100 pitches and a format which ensures an efficient rotation of matches. Our umpires also have a big job on their hands with so many matches going on – we all really appreciate their efforts.

Eight PE regions will battle it out in the Championship Division 1, with each region having a squad of eight triples. In Division 2, there will be a further six PE regions, a Combined squad and the Welsh Pétanque Association also with eight triples teams each.

In the associated Challenge competitions linked to both divisions, a further 16 squads comprising four triples teams each will compete.

The competition format is seven rounds on the Saturday with each region playing each other and then five further rounds on the Sunday, the playing order determined by the position at the conclusion of the first day’s play.

Last but not least, our young players will play in six regional youth teams, along with a Combined and National Youth Squad selection to make up eight triples. Here our young members from Southern Counties will try to retain the title they won in 2018.

Division 1 sees Chiltern seeking to defend their title and win the competition for the third consecutive year. The margin of victory was just five games over runners up London last year and in 2017 it was settled on points difference between Chiltern and Kent. It’s bound to be another hotly contested competition.

Division 2 was won by Sussex last year and they were rewarded with promotion to Division 1 along with runners up Thames Valley. Third placed Heart of England will hope to achieve the top spot although Eastern and Wales finished only just behind them last year and they will face stiff competition from Anglia and Isle of Wight who were relegated from Division 1.

In the Challenge competitions, Southern Counties will be focused on retaining the Division 1 title they won last year, although in 2018 this was only by a 15 points difference overall as they amassed an equal 29 wins with runners up Chiltern. There was in fact only three games difference between Southern in top place and Sussex in fifth place. In Division 2, last year’s winners East Midlands have joined Division 1 and there is a new look to the competition including the return of Devon to the fray.

Precision shooting under the lights on Saturday night will feature again, and this year it will be regional shooting champions only plus the defending champion Sarah Huntley. D C Pétanque are kindly sponsoring this and the two finalists will each get a new set of boules. The qualification rounds will be held on Friday.

Similarly, four of our young players – Kai Sheffield, Jamie Brooks, Marc Franco (defending champion) and Ella Slade – have all pre-qualified for the Pen-Y-Coed Pétanque sponsored youth precision shooting. It will be Kai v Jamie in one semi final and Marc v Ella in the other. A new set of boules will be the prize for the winner and trophies are also being provided.

This will be the last Inter-Regionals for our retiring President Martin Eggleton along with Annette Eggleton, who has been at the centre of ensuring a smooth operation for a number of years. Thank you both for providing such great experiences for our players.

Martin will be presenting the President’s Cup for the first time which will be awarded to the region that has performed the best in aggregate across the Championship, Challenge and Youth competitions.

Look out too for the NYS raffle – you will be able to get tickets at the control desk. Raffle prizes much appreciated and all proceeds will be used to support the development of our young players.

You can get in running updates for each competition and that will be of interest in particular to those who will not be at Hayling.

It remains to wish all our members a successful and enjoyable weekend….don’t forget the suncream and don’t party too hard, this is a marathon not a sprint!