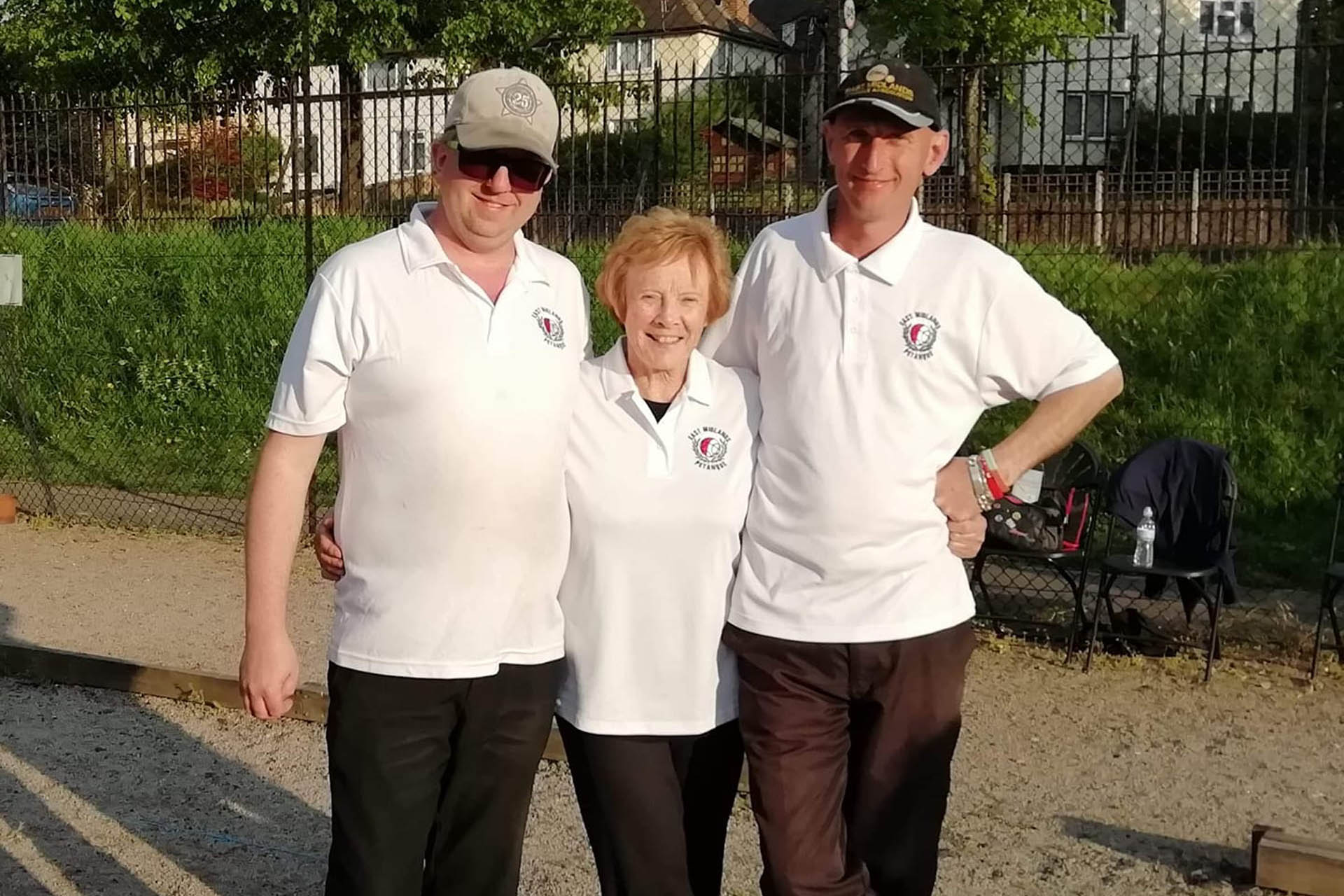 36 teams registered to play by the usual PE 0915 cut off time, all trying to win national honours and a trip to the Monkstone Pétanque Club, Cardiff in August.

As PE has to find eight teams in a single day’s competition, we use the Swiss System (5 rounds) to establish a rankings table. It’s the only time we use Swiss in our national playing programme, although this is the favoured system used at both the World and European Championships in the qualifying rounds.

The principle of the Swiss System is fairly straightforward – the first round is a random draw and then as the following rounds take place, teams on a similar number of wins and losses face each other. Where it can get a little complicated is in the case of uneven numbers, where teams can face what is known as a ‘crossover game’. Here it is possible, for example, that a team on three wins after three rounds can face a team on two wins. It only works perfectly with 32 teams in a five-round Swiss.

Where things get more complicated is in the case of a tied number of wins. This is where the Buchholz (BHN and fBHN – see below) tie break comes in. Here, unlike in usual tie breaks where the points for and against are used, the Buchholz makes an assessment of the respective strengths of the teams played during the competition.

If you think about it, it makes sense, as teams are ranked on the respective strengths of the teams they have faced. Teams are given credit for the toughness of the draw and it’s calculated by adding up the number of wins of each team’s opponents (BHN). Statistically, this is robust as it shows that a team whose opponents have picked up say 10 wins from the five rounds must have had a harder draw than a team whose opponents picked up say 7 wins.

Why is this rather tortuous explanation being made, you may ask? Well, apart from helping explain a system used at the very highest levels of our sport, last Sunday two of the teams competing ended up in joint 8th place on equal BHN and fBHN’s having both won 3 out of 5 games. It doesn’t happen that often!

For the two teams placed joint 8th, it was playoff time and the sixth match of the day for Fay Golder, Steve Golder and Margaret Eldridge against Nouri Beladaci, Mokhtar Benarab, John Geddes & Ewan Cameron. Team Golder won late in the day and secured 8thplace outright.

There was only one team at the end of the day on a perfect 5 wins and this was Clive de Silva, Phil Bradshaw and Steve Daykin. Congratulations team, you are England 1.

There were a further 6 teams on four wins and after Buchholz was applied, the respective placings were:

Congratulations to all our successful teams and commiserations to those that missed out on this occasion. There were actually 11 teams on three wins (including the two playoff teams) and they were only separated by Buchholz in the tie break. It was a very close-run competition.

We now look forward to Wales on the weekend of 10thand 11thof August where we face both the hosts Wales but also Scotland and Jersey. It was very close between England and Jersey last year in the Channel Islands, and the England delegation’s recent encounter with the Jersey delegation in Spain in a bar after the end of the World Championships suggested that they fancy their chances this year. We know that England’s 8 will have something to say about that on the pitch in Cardiff. Bring it on!