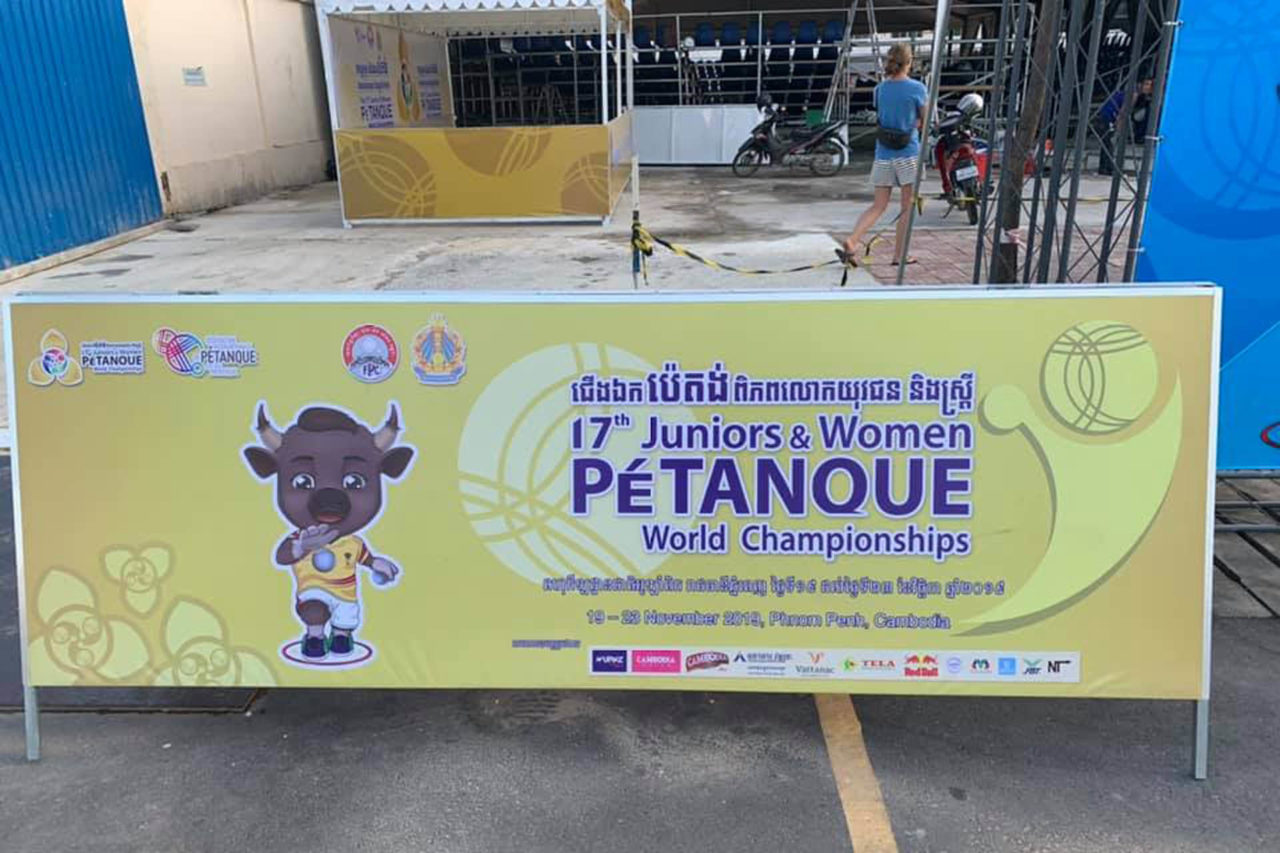 England’s senior female and young players have travelled today on a long-haul flight to Phnom Penh, the capital of Cambodia to compete in their respective World Championships.

The tournaments, organised on a two-yearly basis by the FIPJP, our sport’s world governing body will bring together 50 women’s teams from 48 nations (France, the defending champions and Cambodia, the hosts are permitted to enter two teams each) and 30 youth teams from 29 nations (the hosts again entering two teams).

Our Women’s team comprises Sarah Huntley, Emma Longstaff, Sammy Thatcher and Claire White. After the six separate competitions which formed our 2019 National Rankings, Emma and Claire were placed first and second and were offered the opportunity to represent their country automatically.

Sarah and Sammy were selected from the players ranked third to sixth, with Becky Edwins and Kaylee Thatcher also considered but unsuccessful on this occasion despite both competing strongly during the series. Along with the World Championship team, they are our 2019/20 National Women’s Squad.

Our Women’s coach is Rowland Jones, who fulfilled the role successfully earlier this year at the FIPJP World Singles, Doubles and Mixed Doubles in El Ejido, Spain. Our Women’s Double of Sammy Thatcher and Emma Longstaff reached the quarter final stages, the best finish we have achieved for many years.

Our youth team for Cambodia is David Blyton, Jamie Brooks, Liam Floyd and Kai Sheffield who were selected by our National Youth Squad setup following assessment earlier this year. Their coach is Scott Ashby who also took on this role two years ago in Kaihua, China, where our team won a bronze medal in the Nations Cup.

Ensuring that our teams and coaches has the very best back up is Annette Eggelton, our Head of Delegation, another experienced operator at this level.

The FIPJP has provided a programme for both tournaments which begins with the Precision Shooting first qualifying round on Tuesday 19th November at 1530 local time (0830 in the UK). Sammy Thatcher and Kai Sheffield will be shooting for England.

After the conclusion of the shooting on the Wednesday, the triples tournaments proper begin using the Swiss System with the youth at 0930 local time (0230 UK time). This is followed by the first round of the women at 1100 local time (0400 UK time). The rounds of each tournament will then alternate with a further four rounds spread over the remainder of Wednesday 20th and Thursday 21st as follows:

The timings are not the best for us to follow from afar as many of the matches will be taking place early in the morning, but you will be able to keep up to date on PE’s Facebook page if you’re awake! You can also visit the results page which will be periodically updated on the FIPJP website for the Women and the Youth.

Once the 5 rounds of the Swiss have been completed, this will give the rankings for both tournaments.

The FIPJP’s programme states that there will be a ‘cadrage’ (play offs) at 1400 (0700 UK) on Thursday for the Nations Cup for both tournaments.

Over the years, we have learnt to be cautious about the programmes for FIPJP tournaments as sometimes they are subject to late change. However, for the Women it looks like the top 24 teams out of 50 after the Swiss will be in the running, and the programme says that there will be an initial round to get the teams down to 16. Our expectation here is that the Top 8 will go through automatically after the Swiss and teams ranked 9 to 24 will feature at this stage.

At the 2017 World Championships in Kaihua, China, our Women’s team which included Sarah Huntley, Emma Longstaff, Kaylee Thatcher and Sammy Thatcher met Holland in the similar 9 to 24 stage. After winning that match, they faced Italy in the Top 16 where in rainy, floodlit conditions (the venue was not covered) they unfortunately exited the tournament.

26 Women’s teams will compete in the Nations Cup and the cadrage here will seek to bring the teams down to a last 16. This could imply automatic qualification for teams ranked ranked 17th to 22nd with the rest playing the initial round to get down to 16.

For the Youth, the system suggests that the Top 16 after the Swiss will proceed to the Championship and the remaining 14 will compete in the Nations Cup. Again, our expectation is that the cadrage in the Nations Cup (taking place simultaneously with the Women at 1400 on Thursday) will involve teams ranked 17 and 18 after the Swiss going through automatically and the teams ranked 19 to 30 playing off to get into the Quarter Finals.

Friday 1445 (0745 UK) is scheduled for the Quarter Finals of the Youth Championship and the Nations Cup and this is followed at 1615 (0915 UK) with the same Quarter Finals for the Women.

All in all, a lot of the play will be taking place in the middle of the night for English pétanque fans.

It remains to wish our Women’s and Youth delegations every success in this exciting Championship. We’re sure that it’s going to be a great experience in a country which is very passionate about our sport. We’d also like to thank the Cambodian Federation and the Government of Cambodia for the accommodation they have provided at no cost for our delegations.