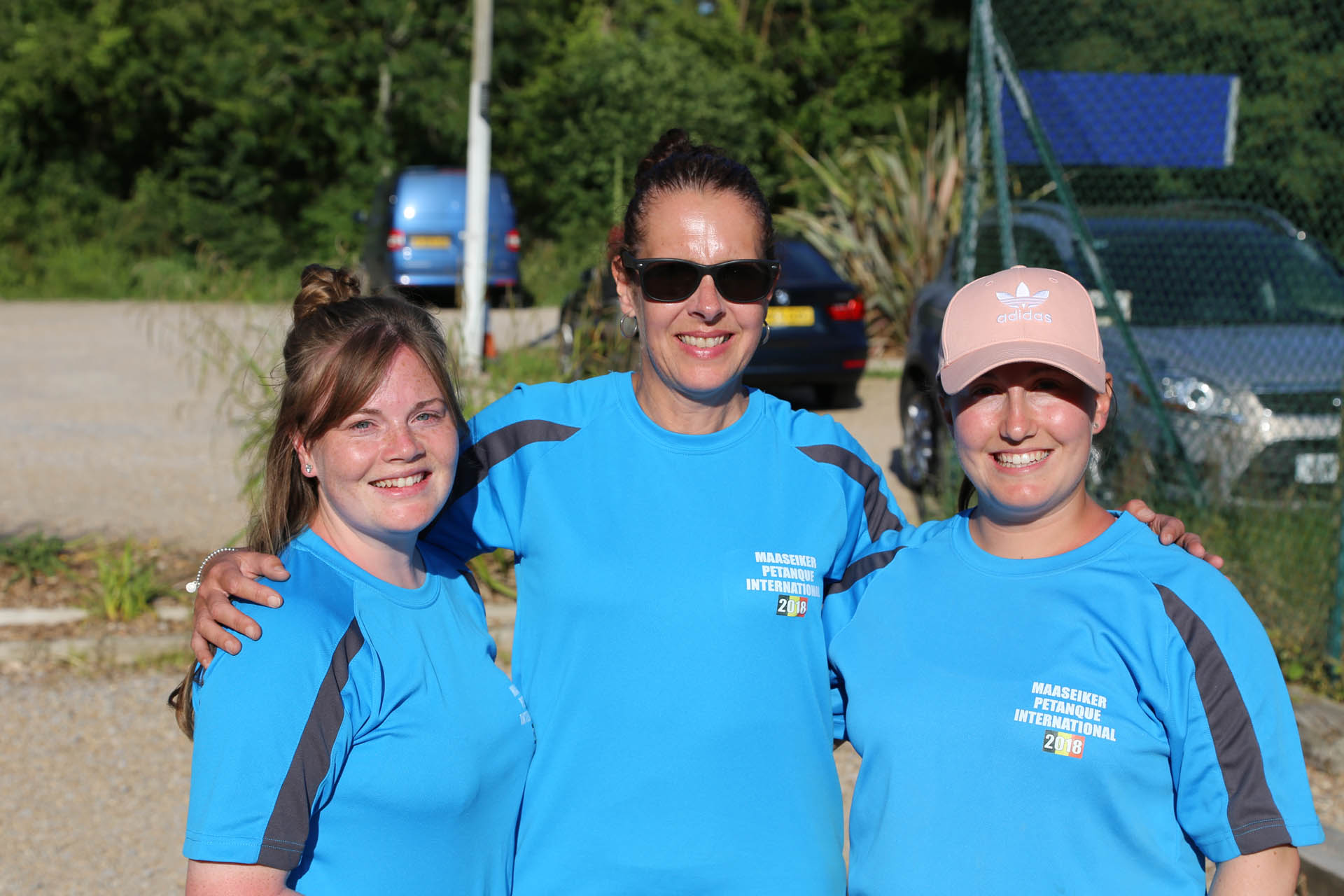 As it was with our Men, the 2019 series of Rankings competitions for our Women also had a thrilling finale at Worthing PC. Up for grabs was the honour of representing England at the World Championships in Phnom Penh, Cambodia this coming November as well as well as qualifying for the 2019/20 Women’s Squad.

Saturday 29th June saw 11 Doubles registered to play and this meant three poules of 4 (one with a bye) in the morning qualification with the top 8 teams on wins and points going through to the knockout.

The draw then pitched White/Thatcher versus Edwins/Evans, which the former won by the slimmest of margins 13-12 and Thatcher/Slade versus Seville/Griffin, which the latter won 13-8.

The Final turned out to be a comfortable victory for White and Thatcher by 13-3, making up for their disappointment in the National Doubles at Gravesend when they lost a see-saw contest against Becky and Carolyn Edwins. Seville and Griffin showed throughout the day that they are a formidable pairing, but by their own admission had their weakest performance of the day in the Final.

Just as with our Men, as well as being the third and final triples format round in our Rankings, this was also the tournament that PE had designated as finding our National Triples Champions 2019.

Overnight, the updated Rankings table placed Emma Longstaff in a pretty much secure position on 114 points, some 26 points ahead of her previous day’s double partner, Sarah Huntley. It was all to play for the reaming automatic invitation place for the World Championships and the Squad with Claire White on 84 points, Becky Edwins and Sammy Thatcher on 80 points, Kaylee Thatcher on 74 points and Sabrina Seville on 72 points.

It would come down to a final day battle between eight teams, with the two poules in the morning simply determining the playing order for the afternoon knockout stages.

The Semi Finals then saw White/Thatcher/Thatcher defeat Thorpe/Wilmott/Scott 13-2. The Huntley/Longstaff/Goliger versus Edwins/Mason/Matthews ended in a similarly convincing victory  for the former 13-3.

Going into the Final, it was pretty much the same story as the Men, with the Top 6 players settled in the shape of Longstaff, Huntley, White, the two Thatcher sisters and Edwins, but it became clear given the composition of the teams that the second automatic invitation place would be settled between Huntley and White. Whichever team came out of top would deliver the second place to its respective player.

It was a particularly strong weekend for Claire White in that like her namesake in the Men’s she amassed 60 points from her victories in the Doubles and Triples.

The final table shows 53 PE Women with points and the Top 6 ranked were the same as 2018, although in a slightly different order, showing the consistency of the top players. A special mention should go to 12 year-old Ella Slade who achieved a superb joint 7th place on 80 points with Sabrina Seville, the latter showing once again that she can achieve a high position at national level.

It should also be noted that Emma Longstaff in amassing 138 ranking points and securing 1st spot in the National Rankings, was able to win (with help from teammates in the Doubles and Triples) in all three formats of the sport, last achieved by Sarah Huntley in 2017.

Congratulations to all our female players this year for the way they competed but also the spirit in which they played throughout.