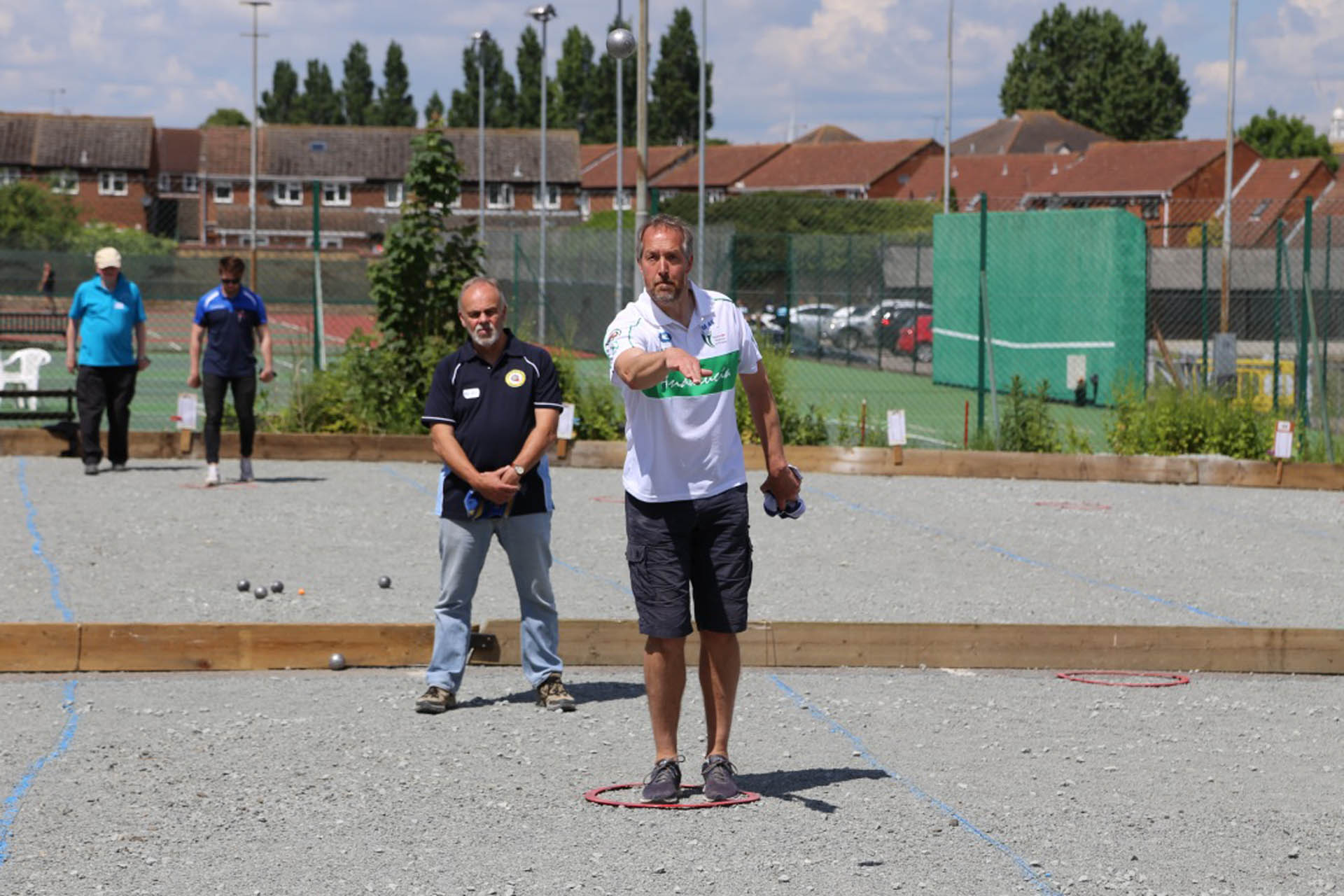 Our Men compete alongside our Women on Saturday 19th September and with a very encouraging entry of 56 players, just 6 down on 2019.

Last Time out, 16 months ago, Rowland Jones was our Champion after he defeated Jason White 13-7 in the final. Rowland had a tough match in the semi-final eventually shading out Barry Wing 13-12, while Jason won his semi-final match more comfortably against Phil Claydon.

As in the Women’s tournament we will have a new champion in 2020, as Rowland is not defending his title.

The 56 competitors have been pre-drawn into 14 unseeded poules of four with each player involved in three untimed games in the morning. Our Events Group deliberated for some time over format and has decided to introduce a cadrage following the morning poules.

The cadrage is not a familiar device in English tournaments but is often encountered internationally. It is a middle road between taking the top 16 or the top 32 through to the afternoon knockout, and involves the teams placed 9th to 24th on games won and points playing a preliminary knockout round. The eight winners in the cadrage then face the players ranked 1 to 8 in the round of 16, with the cadrage losers competing in the Gold Plate.

The order of play for the poules will be:

The pitch allocation can be seen here.

Serial England international Sofiane is a three-time winner of this title in 2005, 2007 and 2012 and is a formidable Singles player, although he didn’t play last year. Christian didn’t have a great morning in 2019 with just one win, but rallied in the afternoon to win the Silver, beating Tim Raine in the final. Jake and Marc didn’t compete last year.

Dave is a former finalist in this competition when it was held on the Isle of Wight and seems to always enjoy the format. Jack and Ross are seasoned England internationals, and Ross has represented England at World Singles level, famously taking three points off World Champion Dylan Rocher in Nice in one end. He won the title two years in a row in 2013 and 2014. Jack met an in-form Jamie Brooks in 2019 and was knocked out of the competition 13-8 in the round of 32. Steve will hope to improve on his last year’s performance where he failed to register a win in the morning, but he’s got one of the toughest poules in the tournament!

Josh was the only player in this poule to play last year and he failed to win a game in the morning. This poule offers a great opportunity to all four players qualify for the Gold.

This is an interesting line up of players including the highly experienced and ex-England Youth Coach, Matt, Thierry who went all the way to the Final in our 2018 Singles Rankings at Nottingham and Tim who always seems to pull out a surprise result or two in this format. He was the runner up in the Silver Plate in 2019. Michael, who didn’t compete last year, finds himself in a challenging group.

Wayne got through to the final 16 of the Silver last year, while ex-England Veteran Jean-Louis was ranked 15 after the poules last year and finished up winning the Gold Plate, beating Dan Cooper in the final as well as former English Singles Champion Dean Seville on the way. Keir didn’t play last year but is an experienced and enthusiastic player. Martin qualified for the Gold after two wins in the morning last year, eventually losing to current England Men’s Squad member, Sam Blakey in the Gold Plate.

2019 National Youth Squad player Angus joins Ivan who ended his tournament last year in the first round of the Silver Plate along with Josh and Mark who both didn’t compete last year. Josh was a semi-finalist for the Isle of Wight at the 2019 Doubles Champion of Champions.

2019 England Espoirs player Aston progressed to the quarter finals of the Silver Plate last year where he lost to Tim Edwins. Richard and Andrew didn’t play last year, while Tim won two out of three matches in his morning poule last year and was ranked 17 at lunchtime. He eventually lost in the first round of the Gold Plate after falling victim to Jamie Lewis in the Gold knockout.

The random draw brought together English Champion Club Baldock Town teammates Sean and Reece who also both have England honours. This will mean a big game will happen early on in the tournament. Sean always thrives in Singles, won the title two years in a row in 2015 and 2016 and must be one of the favourites this time around. Dan and Thomas have landed themselves a tough draw although they will hope to build on their experience of competing in this tournament last year.

Ex-England Espoir Callum is a proven strong player in Singles and showed it last year when he progressed all the way to the quarter-final and only losing narrowly to eventual champion Rowland Jones 11-13. Ex-EPA National Secretary Tony didn’t compete last year and nor did Pierre. Hakim had a very strong morning in 2019 winning all three of his matches but was defeated by Jeremy Huntley in the first round of the Gold. He eventually ended up losing to Dan Cooper in the semi-final of the Gold Plate.

Mike is another player who seems to particularly enjoy the Singles format and he has progressed to the late stages of the competition in the past. He was ranked 22nd after the poules last year but lost to Antoine Sauot in the first round of the Gold knockout. Dean made it to the round of 16 in the Silver where he lost to Dave Winkworth. Vince was also a competitor in the Silver after chalking up only one win in the morning and was a victim of Tim Edwins in the Silver Plate after losing to Richard Smith. Robert didn’t play in 2019.

This looks like a very attractive poule with England Youth International Jamie, current England Men’s Squad member Sam and two players in the shape of Paul and Lee who are always tough opponents. Sam went out to Jason White in the first knockout round of the Gold last year and Jamie lost in the round of 16 10-13 to Barry Wing. Both will hope to go further this time around. However, could this be a poule for an upset?

Only Glen played last time out in this tournament where he just missed out on Gold qualification in the poules. He lost out to Christian Biagoli in the round of 16 in the Silver. Callum was part of our England Youth ‘B’ Squad in 2019 and this will be a good test for him. Jeff and Kit should enjoy playing in this poule.

If PE Events Group Chair Barry was hoping that a random draw would be kind to him, it didn’t exactly end up that way as he finds himself in one of the toughest poules! He went right to the semi-finals last year where he lost by the narrowest of margins to Rowland Jones. Current England Men’s Squad player Jeremy is always strong at Singles, although he too fell victim to Rowland Jones 9-13 in the round of 16 last year. Antoine was ranked 10th after the morning poules in 2019 after he cruised through his poule with three wins. He lost in the round of 16 to Ross Jones. Peter finds himself amongst formidable opposition.

Only the top 8 ranked players by games and points are guaranteed a place in the Gold Main, and they will be joined by the 8 victors in the cadrage.

Players ranked 25 to 40 after the morning poules will compete in the Silver while those ranked 41 to 56 will be in the Bronze. First round knockout losers in both competitions will join the respective Plates.

There will be cash prizes and these will be announced prior to the competition once our Events Group has worked out the allocations.

It’s great to be back! We’d like to wish all our men players an enjoyable and safe tournament.