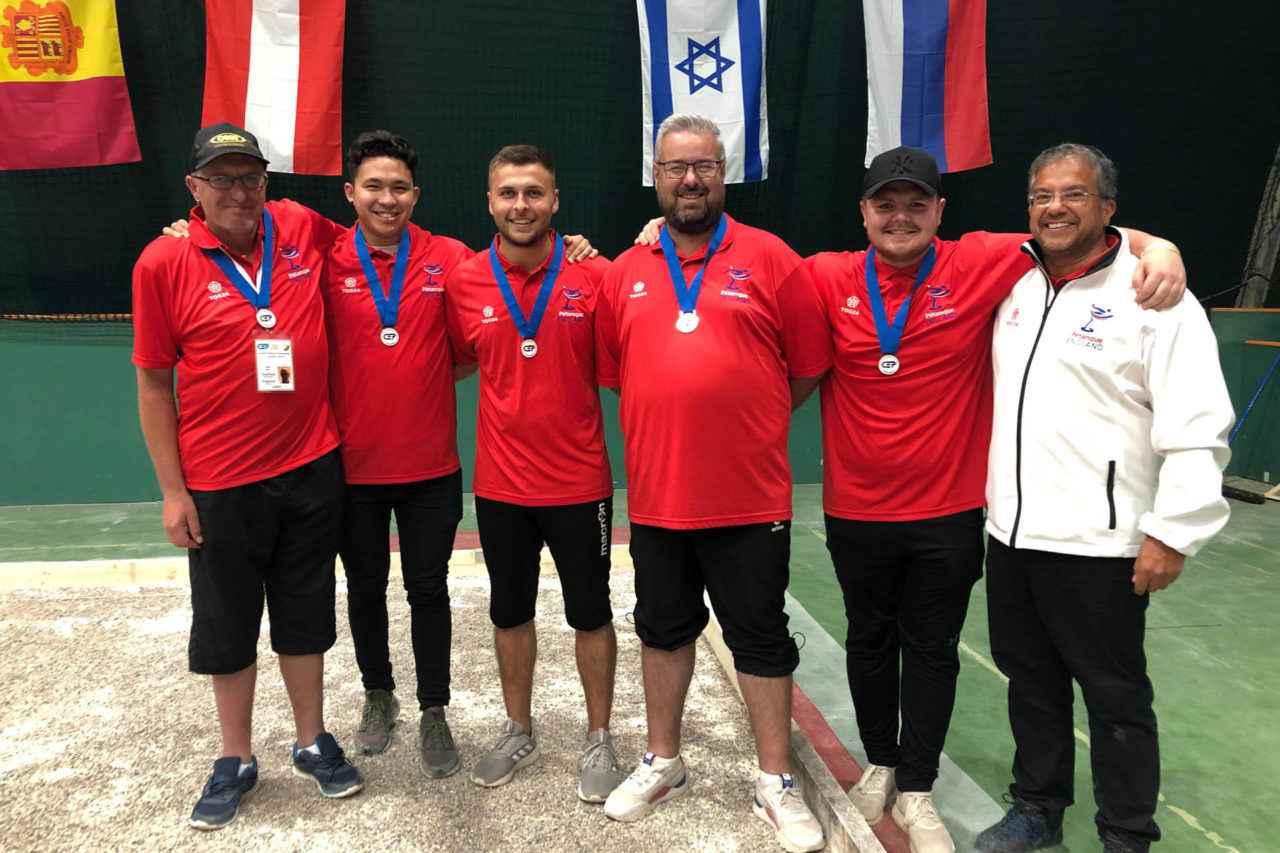 England’s Men returned home this evening from the European Championships in Albena, Bulgaria with a bronze medal finish in the second-tier competition, the Nations Cup.

This gave the team an official ranking of joint 19th, meaning that our players Sam Blakey, Reece Gould, Rowland Jones and Jason White secured an invitation for our country to next July’s World Championships to be held in Lausanne, Switzerland.

Before the triples competition started, Jason competed in the precision shooting and achieved a top 16 position.

Despite this positive result in the shooting, the tournament proper did not start well for England in the five round Swiss qualification with a close defeat 11-13 by Latvia in the first round.

The draw in the second round was then made from the 18 first round losers in the 36-nation tournament. It does not necessarily follow that the second round will be easier because you face a losing team. This proved the case for England as we were drawn against one of Europe’s stronger performers, Sweden, who had lost to one of the tournament’s favourite teams, Italy in the first round.

England did not get into the match and Sweden won 13-3, meaning that our team would be knocked out of the Championship if they lost any of their three remaining qualification games.

With no room for a further defeat, England showed real focus and began a revival in fortunes with a 13-0 defeat of Slovakia in the third round. In the fourth round, our team made it two wins and two losses with a 13-8 victory over Greece.

This then lined up a final fifth round tie against Austria, where a 11-9 margin in our favour when the time ran out in the match meant that England had completed a strong comeback.

What then followed was a nervous wait for the outcome of the remaining matches to find out the final ranking in the Swiss qualification. Whilst at the conclusion of our final match, the table showed a top 16 place and advancement to the poules stage of the Championship, England slipped agonisingly into 17th place and the Nations Cup.

It came down to a difference of two Buccholz points (BHN), where England’s opponents in the Swiss had won eight matches in total over the five rounds, while the opponents of the 16th placed nation (Wales) had won 10 matches overall.

Frustratingly the Swiss table showed that England was the only team on three wins not to proceed through.

With World Championship qualification still up for grabs, England’s task was to make it into the quarter final stage of the Nations Cup which required the team to win through its poule. England as top seeds in the Nations Cup were placed in a poule with San Marino (ranked 32nd in the Swiss and having won through a cadrage match which involved the eight lowest ranked teams), Ukraine (ranked 24th after the Swiss) and Norway (ranked 25th).

England prevailed easily against San Marino 13-2 and then faced Norway who had won 13-9 against Ukraine. A win would mean no need for a barrage match and a Quarter Final place. England won their fifth consecutive match convincingly 13-2.

The Quarter Final saw England play Turkey and the series of strong victories continued with a 13-3 success, meaning England had only dropped seven points in our last three matches.

With a minimum of a bronze medal secured, England faced Portugal in the Semi Final. Unfortunately, England was not able to make seven wins in a row with an 8-13 reversal, leaving Portugal to face Monaco in the Final, with the latter taking gold 13-7.

In the Championship, there were a few surprises, with Belgium defeating holders France 13-5 in the Quarter Final. Slovenia, who England had encountered in Masseik last month showed that they have become a force with which to reckon as they defeated Sweden easily 13-3 in their Quarter Final.

In the Semis, Slovenia were stopped in their tracks 0-13 by Italy, and Belgium defeated Spain 13-3. This set up a Final where Italy took gold by the finest of margins 13-12 over Belgium.

At the beginning of this season PE’s playing programme had set a primary objective of a top 16 place in the competition and a secondary objective of qualification for the World Championships.

In the event, England missed out for the top 16 on a narrow Buccholz tie break but overcome what was a real disappointment to stay focussed and secure the bronze medal in the Nations Cup and World Championship qualification. In this positive respect, the team stayed strong and fought through to the end despite not making the desired breakthrough.

PE would also like to put on record our thanks to Joe Sheffield our Coach and Clive De Silva who stayed on after the Veterans Championship to support the team as Head of Delegation.