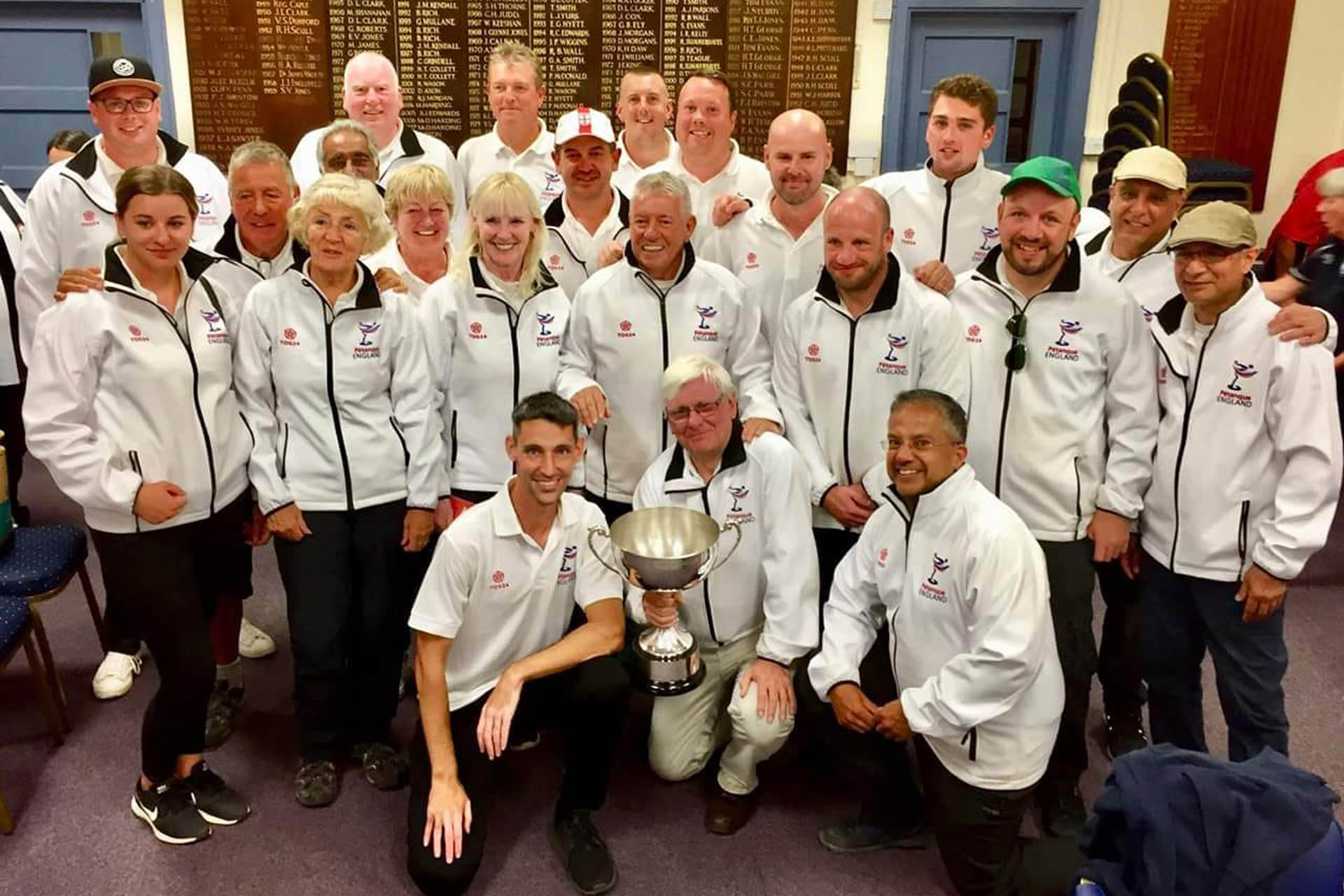 Poor weather in Wales over the weekend of 10th and 11th August did not dampen English spirits as our team chalked up another fantastic victory in this annual contest which pitches our country against Jersey, Scotland and Wales.

At the very convivial surroundings of the Monkstone club in Cardiff, England’s eight teams battled it out in the usual twelve-round format which means that each country faces each other four times during the two days of play on Saturday and Sunday,

The closeness of the 2018 competition where England only defeated Jersey by three matches in total was reflected in the very first round of the weekend where the two squads registered a tied 4-4 match.

England tied their next round 4-4 with Scotland and edged a 5-3 win over Wales while Jersey achieved exactly the same results in their respective head to heads. This meant that the closest rivals of 2018 were both on 13 wins as they faced each other again.

In a major setback to English hopes of retaining the title, only England 4 and England 6 chalked up wins, giving Jersey a 19 wins to 15 advantage after four rounds.

However, in the final two rounds of the day, Jersey failed to capitalise on their win against England after they suffered a 3-5 reversal by Wales and finished with a 5-3 defeat of Scotland. England, meanwhile, had bounced back with 7-1 and 6-2 wins over Scotland and Wales respectively.

At the conclusion of Day 1, this left England in the lead with 28 wins, just one ahead of Jersey on 27. Wales were in third spot with 22 wins, while Scotland were placed fourth on 19 wins.

Hopes for a break in the rain unfortunately did not materialise as Sunday got underway, and like the day before, England faced Jersey once again in the first match. Given the state of the tournament, this was always going to be a crunch encounter, and England dug deep to prevail 5-3 and take a three-win advantage overall.

Spurred on by this positive start, England really found momentum with successive 6-2 victories over Scotland and then Wales. Jersey, by contrast, could only find a narrow 5-3 win over Wales and a 4-4 tie with Scotland.

By the time of the final meeting of the weekend of England and Jersey in Round 10, England enjoyed a six-win advantage which turned into an eight-win margin after England repeated the 5-3 victory achieved in the first match of the day.

The trophy was safely in English hands once again with one round left of the twelve after England won 5-3 against Scotland and Jersey lost 3-5 against Wales, giving England an unassailable ten-win lead. A final win by England 6-2 against Wales and the same result for Jersey against Scotland, left the same ten-point gap between the teams on a final tally of 61-51, with Wales on 46 and Scotland on 34.

The best performing team of the weekend was England 4, comprising the father and son combination of Matt and Jamie Blyton along with teammate Lee Edgar. They achieved an excellent 11 wins out of 12, losing only one match to the Wales 1 team of Peter Westall, Jeremy Clare and Len Field. Well done team!

Thanks to England’s Head of Delegation, Ken Buchan for his support of our team and also to Steve Snudden for the real time updates on the scores and the final detailed results. Thanks to TOG24 as well for the supply of our kit – our team really looked the part and were very smartly turned out.

Special thanks to the Welsh Pétanque Association and the Monkstone club for being such superb hosts, it is much appreciated by everyone in PE. To the players of Jersey, Scotland and Wales, thank you all and we hope that new friendships have been established in our sport.

Congratulations to all our players that represented their country with pride and brought the trophy home:

Next year we will defend that silverware for the 21st time in Scotland. That is always a superb trip. It’s not too early to start thinking about your team for the 2020 Home Nations Qualifier!